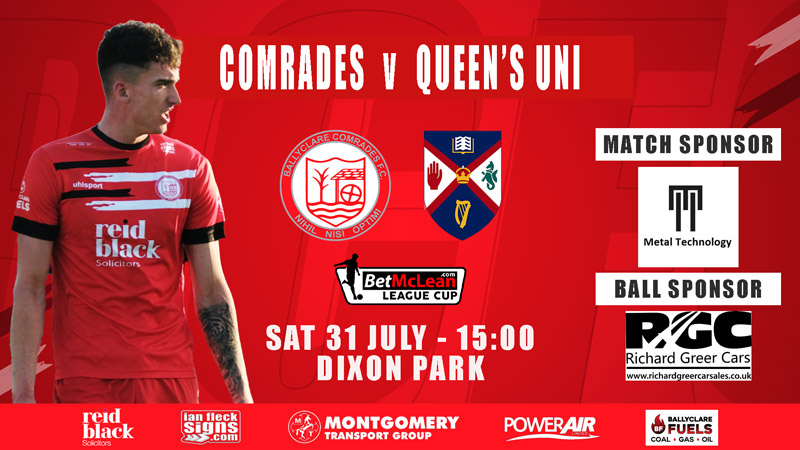 We’re back to competitive football this Saturday as we take on Queen’s University in the first round of the Bet McLean League Cup at Dixon Park.

Entry: Pay at the gate – Adult £8, Concession £5. A reminder to all season ticket holders that season tickets are not valid for cup competitions

Queen’s University come into the game in a very similar boat to the Comrades. No league campaign last year meant a ball was hardly kicked and unlike the Comrades, QUB decided not to take part in the Irish Cup. With the lack of recent match action, there’s very little to report on how the opponents might line-up this Saturday. If there’s one thing the Comrades can be sure of, it’s that Queen’s will be just as eager to hit the ground running in the first competitive game of the season.

If pre-season fixtures told the full story, they would say the Comrades have been defensively solid, yet struggled to find that killer instinct in the final third at times. We’re all aware there’s very little you can take from looking at friendly results though, with plenty of chopping and changing of teams. Fans will get a much better idea of how the team are performing come Saturday, in our first competitive fixture of the season. We may well see a few competitive debuts for some of the lads at the weekend.

Paul Harbinson’s summer signings have impressed throughout the friendlies and the manager had this to say about the upcoming fixture:

” It feels like it’s been the longest preseason in the world but thankfully at least it feels the same for all Championship clubs. We are so excited and relieved to finally be here at competitive football and with the new designation of Elite status, the season can get going with assurance that it’s here to stay.

“There will be a mixed bag this year of COVID instances and possibly increased injuries due to the year out, across the league, which will only add to the unpredictability of the Championship. We go forward positively and preparing for an enjoyable season of football.

“This week, we know what to expect from Queens, as Peter will have them well organised and disciplined as he always does. They are always very good with the ball and we will need to concentrate for 90 minutes if we want to compete.

“It’ll be nice to see familiar, and hopefully some new faces in the crowd cheering on the Comrades. We will give our all to ensure it’s worth the visit to Dixon Park.”

2019/20 Championship Season was the last time we faced Queen’s. The Comrades were the victors that day with a 2-0 victory at Dixon Park in January 2020. Tom Mathieson opened the scoring in the first half before Joe Tully pounced on a mistake at the back to make it 2-0 with 6 minutes remaining. Queen’s ended the game with ten men following Marc McKenna’s stoppage time dismissal for a second yellow card after bringing down Gary Donnelly inside the box but, from the spot-kick that followed, Tully was denied by a save from Brown.