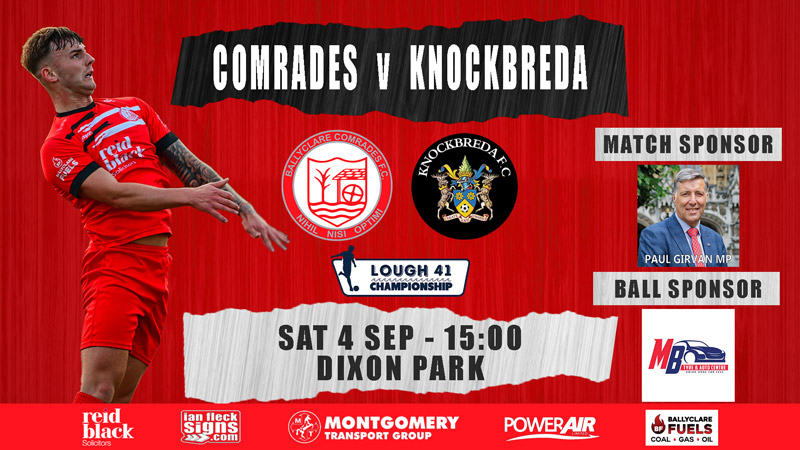 We invite Knockbreda to Dixon Park tomorrow afternoon in our next Lough 41 Championship fixture.

Knockbreda come to Dixon Park following a 3-1 victory over Queen’s last Saturday. They were hot out of the blocks as Lee McGreevy scored within the opening minute before Ethan Devine made it 2-0 (the clock hadn’t even reached double figures yet). Their last away outing was to Wilgar Park, where Dundela fell victims to a very similar story, with Knockbreda running out 4-3 victors. Lee McGreevy needed just 20 seconds this time to find the back of the net and Knockbreda found themselves 3-0 up with 35 minutes gone. Knockbreda manager, Colin McIlwrath, will be urging his players to start like a house on fire once again as they visit Dixon Park this Saturday.

A late Liam McKenna strike was enough to see the Comrades squeeze to a narrow victory over HW Welders last Friday night. The game was a relatively quiet affair with both teams evenly matched. The signing announcement just before the game of experienced Irish League defender, Howard Beverland, was sure to give the squad a boost in confidence and the 31-year-old didn’t disappoint the Dixon Park faithful as he put in a man of the match performance. We’ve had a couple of outgoings since last week as well, with defender, Kyle Crawford, and young forward, Josh McGreevy, both leaving the club to join Ballymoney United. Paul Harbinson did manage to capture the signing of 24-year-old ex-League of Ireland full-back, Ian Fletcher, on deadline day. The manager will be hoping his new players gel quickly with the squad as we enter a jam-packed September schedule.

Our last competitive fixture against Knockbreda was in March 2020 when the Comrades came away from Breda Park with all 3 points following a 3-1 victory. Gary Donnelly struck the opening for the Comrades on 11 minutes with a close-range finish after Nathan O’Neill found him with a cushioned header. Then, six minutes later, JB Dobbin made it 2-0 after sliding home the loose ball when ‘keeper, Lewis Deane, kept out efforts from Samuel McIlveen and Oisin Barr on the follow up. Knockbreda pulled one back on the stroke of half-time through Fra Rice after he nipped in to capitalise on a mix-up between Ben McCauley and Kevin Hagan. However, with just over a quarter-of-an-hour remaining, O’Neill made sure of the points for the Comrades with a header from six yards after Dobbin crossed into the box. This turned out to be the last game we played before the league was called to a halt due to the global pandemic.