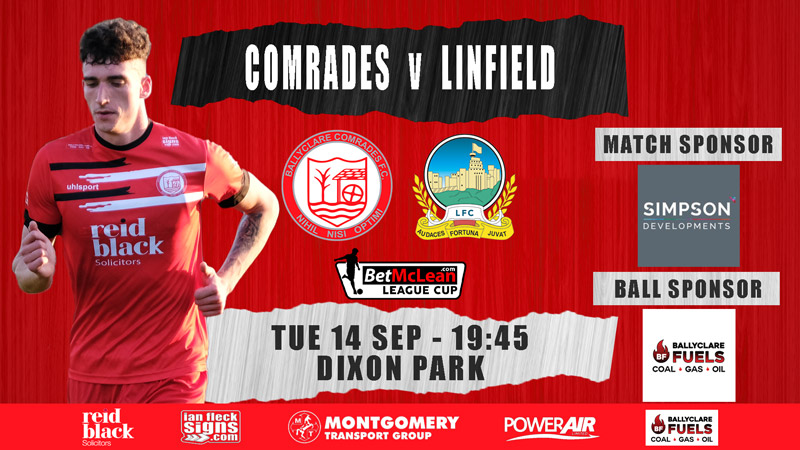 We invite Danske Bank Premiership Champions Linfield to Dixon Park tomorrow evening in the 2nd round of the Bet McLean League Cup.

All supporters should be aware that there will be a strict gate policy; anyone leaving the ground during the game (including at half time) will not be able to get back into the ground.

Linfield come to Dixon Park following a 3-2 victory over Portadown in the Danske Bank Premiership at the weekend. They had to twice come from behind as Portadown led 2-1 at the break. Back came Linfield, however, on 67 minutes with Matt Green’s first goal for the club after he met Kirk Millar’s cross to turn it beyond Doherty. It then fell to Manzinga to claim the win for the visitors with five minutes to go when he got past a defender before unleashing a powerful drive into the net to grab his second of the game. The Blues have only played two league games with games being called off due to players away on international duty.

The Comrades got back to winning ways on Saturday with a 3-1 victory away to Queen’s University in the Lough 41 Championship. Three goals in the final 20 minutes helped Paul Harbinson’s men overcome the Students at the Dub. Liam McKenna once again popped up with the goods as he broke the deadlock with a 25-yard drive into the top corner. Ciaran Heggarty got his first league goal for the club just seven minutes later when the ball was slipped through to him and he confidently put the ball into the roof of the net. The students did pull one back before Ballyclare restored their two-goal cushion in stoppage time when Andrew Mooney knocked home the rebound after Adam Gray saw his initial penalty saved. Speaking on the upcoming game, Comrades skipper, Chris Ramsey said “It’s going to be a tough game. Linfield are the best team in the country, they’ve proved that over the last load of years and it’ll be tough for us. But we go into it with no pressure on us, we just have to go out and work hard and listen to how we’re being told to set up and if we stick to our shape, hopefully we can pull-off a bit of a surprise result.”

The last time these two sides met in a competitive fixture was in the Irish Cup 5th Round in January 2019. A second-half goal from former Comrades player, Joel Cooper, was the only difference between the two sides on the day as Linfield progressed to the next round with a 1-0 victory at Windsor Park. Due to some heroic defending, the Comrades made it in at the break with the scores level at 0-0. Early in the second-half, Adam Gray had Ballyclare’s best chance of the game as a powerful shot from outside the box had Linfield ‘keeper, Roy Carroll, scrambling; the experienced international ‘keeper eventually got the ball under control though after his initial save bounced back into danger. Linfield’s persistence paid off as Casement’s deflected cross found the head of Andy Waterworth who flicked it on to Cooper and he headed in. The game finished 1-0 and Linfield progressed to the 6th round where they would face Crusaders.