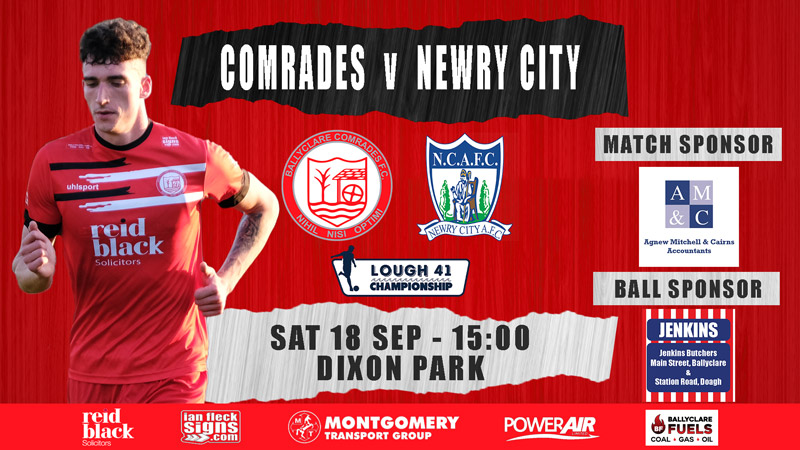 We invite Newry City to Dixon Park tomorrow afternoon in our next Lough 41 Championship fixture.

Newry have been flying since the start of the season and currently top the Lough 41 Championship. They had a 100% record with 6 wins in their opening 6 games and only dropped their first points in the league last Saturday to Ballinamallard United, who brought Newry’s winning run to an end with a 3-0 victory over Darren Mullen’s men. Newry were in league cup action as well this week, where they were put out by a 2-1 defeat to premiership side, Warrenpoint Town. Brian Healy opened the scoring for Newry City with two minutes on the clock but this was cancelled out by Warrenpoint with a clinical finish into the bottom left corner just after the half-hour mark. After the break, Newry had the ball in the net with a quarter-of-an-hour remaining although this was ruled out offside. It took Warrenpoint’s Greg Moorhouse’s 101st minute diving header from Kealan Dillon’s cross to the back post to separate the sides and send Newry City out of the cup. With 2 defeats in their last 2 outings, Darren Mullen will be looking a reaction from his players at Dixon Park.

Paul Harbinson’s men come into the game after being on the wrong end of a 4-0 result on Tuesday night against Linfield. Despite the heavy defeat, Harbinson was in positive spirits following the game, praising his side’s “hard-work, ethic and working for each other”. The manager has challenged his squad to “stay concentrated for 90 minutes at Championship level every week” in the same manner that he seen his side concentrate for large spells against Linfield. On the upcoming Newry game, Harbinson said “There’s no easy game, as we’ve proven already, just as everyone has proven, everyone is taking points off everyone so we’ve just got to see can we focus and can we concentrate, and if we do that, that’s progress and we’ll be happy with that.”. Tuesday night also saw Matthew Herron make his competitive debut for the club while Eoghan Devine made his first completive start. Adam McCart also made his return to the starting lineup following a lengthy spell away from football and Adam Gray came off the bench to make his 200th appearance for the Comrades.

Boxing Day 2019 was the last time these two sides met as The Comrades and Newry City battled to a share of the Boxing Day spoils in an evenly contested encounter at Dixon Park. Newry opened the scoring a minute from the break with Kevin McArdle who cut inside from the right to beat McCauley at the near post with the ball initially striking the upright before going in off the keeper. The visitors might have doubled their lead just after the hour but John Boyle headed off the crossbar from around six yards out before Stefan Lavery fired just past the far post soon after. For Ballyclare, substitute Joe Tully directed a header on target from a Ciaran Dobbin free kick, but Lewis Hunter did well to make the save. However, Tully went one better with eight minutes remaining; after being upended inside the area he kept his composure to step up to calmly beat the Newry keeper from the spot. The Comrades might have secured the points in the closing minutes when Adam Gray struck the post from 20 yards but Lukasz Adamczyk was unable to keep the rebound on target and the game finished 1-1.