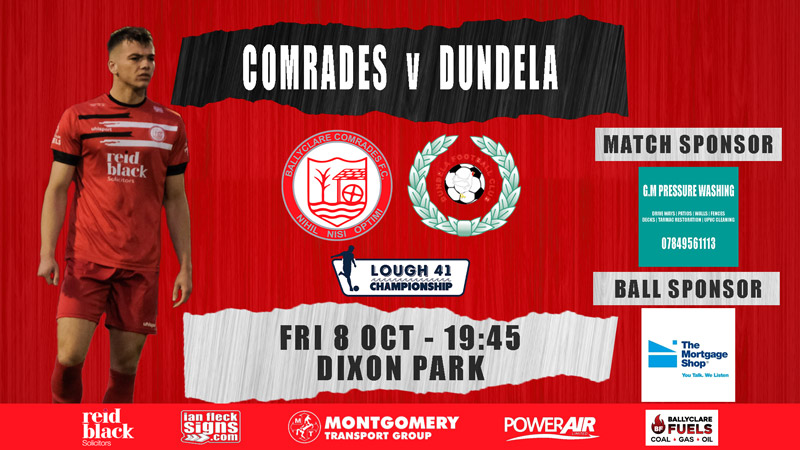 We invite Dundela to Dixon Park tomorrow night for our next Lough 41 Championship fixture.

Dundela have had a surprisingly poor start to the campaign and currently sit second from bottom in the Lough 41 Championship. However, the East Belfast side seemed to have turned a corner since the arrival of manager Niall Currie. They swept to a four-goal victory over neighbours HW Welders in the East Belfast derby at Wilgar Park last Saturday to record their first win in the Lough 41 Championship this season. Eoin Kane opened the scoring for the Duns as early as the second minute after meeting a free-kick to direct a header past keeper Ben McCauley. The Welders had the ball in the net soon after but it was ruled out offside, and they fell further behind on 20 minutes when Guillaume Keke headed home a cross from the left at the near post. That was how it stayed until Jay Magee added a third for Niall Currie’s side on 69 minutes following a goalmouth scramble. Keke then doubled his tally, and completed the scoring, with a quarter-of-an-hour remaining courtesy of a right-footed effort into bottom corner.

The Comrades got back to winning ways last Saturday with a 2-1 victory away to Dergview. An Andrew Mooney double secured the points for the Comrades. Scoreless at the break, both goals came midway through the second half. The 24-year-old opened the scoring on 63 minutes with a back post header six yards out after Tom Mathieson had knocked the ball over following a mazy run. And Mooney doubled his tally just five minutes later when, following a botched attempt at a clearance, he dispossessed a defender to tuck the ball past keeper Alan Buchanan. Benny Igiehon pulled one back for Dergview with ten minutes remaining but it wasn’t enough to spark a late comeback. Howard Beverland & Ian Fletcher both returned to the starting line-up on Saturday following their injuries.

December 2019 was the last time these two sides met as Dundela came away from Dixon Park with all 3 points. In the end it took just one goal to separate the two sides. The Duns got off to the brighter start with Jay Magee seeing Ballyclare keeper Ben McCauley doing well to tip his 20-yard free-kick over after eight minutes. Unfortunately, the first half turned out to be a scrappy affair with the next real effort of note not arriving until stoppage time when McCauley was on hand to deny Owain Beggs. Ballyclare had a great chance early in the second half when Joe Tully laid the ball off for Gary Donnelly 12 yards out but Ryan McBride did well to save. Dundela were next to threaten when, on 71 minutes, substitute Carl McComb was thwarted at the near post by McCauley while, at the other end, Tully fired over from seven yards. What proved to be the only goal of the game came with just less than a quarter-of-an-hour remaining when Tiarnan McNicholl fired home from just inside the area. Both sides had efforts late on with Tully and Beggs coming close but Dundela held on to secure the points.