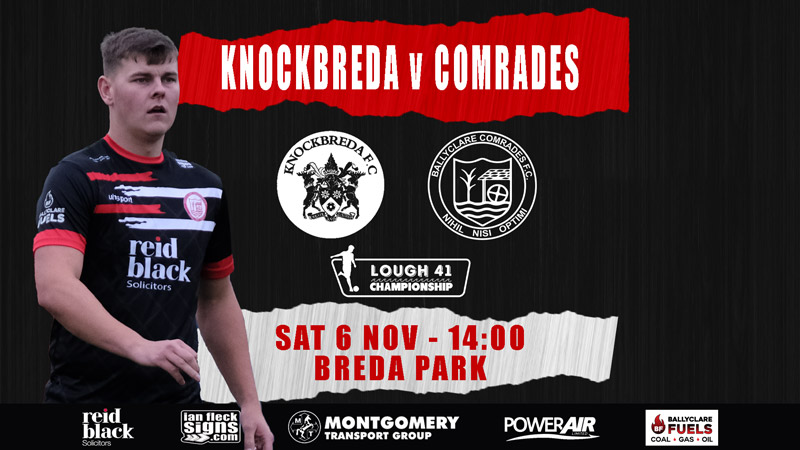 We make the trip to Breda Park tomorrow afternoon to take on Knockbreda in our next Lough 41 Championship fixture.

Knockbreda go into tomorrow’s game currently occupying 9th place in the Lough 41 Championship. Last week, a late winner saw Knockbreda defeat Queen’s University by the odd goal in five at The Dub. ‘Breda moved in front as early as the third minute courtesy of an Ethan Devine spot-kick although Queen’s did level on ten minutes when Adam Robinson tapped home from a free-kick. The visitors regained the advantage just after the half-hour when Lee Rea found the net at the third time of asking but, again, back came the Students when Marc McKenna equalised barely a couple of minutes later from the spot. Queen’s were reduced to ten men just before the break when Stephen McGuinness was dismissed for denying an obvious goal scoring opportunity. From the resulting set piece Devine came close only to rattle an upright. Indeed, the home side did well to keep ‘Breda at bay for almost the remainder of the game before, five minutes from time, Karl Hamill scored the winner with a deflected finish past Conan Doherty.

It has been a rollercoaster of a week for the Comrades. Following the disappointment of last Saturday’s 3-0 home defeat to Loughgall, a result that stopped us from going joint-top of the Championship, Paul Harbinson’s men bounced back with a notable victory to shock Crusaders and advance to the semi-finals of the ToalsBet.com Co Antrim Shield on a dramatic night at Dixon Park on Tuesday. Joe Tully opened the scoring as early as the 3rd minute after some great play down the right-hand side involving Ian Fletcher, Matthew Herron and Ciarán Dobbin ended with Dobbin taking advantage of a slip by a Crusaders defender to play a great ball across the box, finding Tully who calmly slotted in first-time from 6 yards. The Comrades continued to discomfort Crusaders and in the 6th minute, a superbly flighted corner played in by Adam Gray saw Owens head into his own net. Despite dominating the first 45 minutes, the Comrades did let Crusaders back into the game early in the second-half after Gary Donnelly had rather controversially been adjudged to have fouled an opponent when making a clearance. Forsythe made no mistake from the spot to halve the deficit. It wasn’t long before Crusaders were back on level terms. They were very dangerous from set-pieces all evening and from a corner they scored on 59 minutes when Forsythe rose to head in from 9 yards. After an exhilarating game the final whistle brought more drama in the penalty shoot-out. Forsythe stepped up first for Crusaders but was denied by a Richard Purcell save. However, the scores were back level in the second set of spot-kicks when Gary Donnelly had his effort saved by Tuffey. It was 4-3 to Crusaders when young substitute Owen Taylor, making his debut for the first-team, stepped up to take a pressure penalty which he scored confidently. It was now sudden-death and on the seventh round of penalties Purcell saved right on the line from Thompson, allowing Liam Hassin the chance to step up to win the tie and spark joyous celebrations amongst the home supporters. Following the game, a delighted Harbinson said “I’m so proud of the boys. We’ve challenged them from the start that our performances in the last 2 weeks have been poor and tonight we had to make a lot of changes due to illnesses and injuries, and so tonight was just about go out, perform and can you put in a performance to be proud of, and I feel they should be. The performance throughout the 90 minutes was first class.” Moving on to tomorrow’s game, the gaffer said “Tonight’s done, we enjoy it, we celebrate it, we take the positives from it, but if we can’t do the same again on Saturday, then we’ve got to ask ourselves questions. So we’ve got to go on Saturday now and work hard.”

The last time these two sides met was back at the beginning of September where they played out a 2-2 draw at Dixon Park. The visitors started confidently and took an early lead in the 6th minute when Ethan Devine got onto the ball 25 yards out and struck a great effort which found the top corner of the net, giving the ‘keeper no chance. In the latter part of the half the hosts began to come into the game at last and it was from their first real piece of dangerous attacking play that they got an equaliser in the 37th minute. Andrew Mooney did very well to beat a defender on the by-line before laying the ball back in a crowded box towards Liam McKenna 8 yards out. McKenna got not the cleanest of strikes on the ball, but it went in off the inside of the post despite the efforts of the ‘keeper to prevent it crossing the line. A minute later and suddenly Comrades were in front. Good play by Adam Gray saw him run at the Knockbreda defence and play in a great ball from the left edge of the box which was met by a firm header from 6 yards by Liam McKenna who was again the man in the right position to score. The home side went in at the break with a lead, but they couldn’t hold onto it for long into the second half. Eight minutes in Knockbreda levelled the scores when a ball played in from the right was controlled well by Rea who swivelled and planted it into the bottom corner of the net from 8 yards. The visitors were reduced to ten men in the 88th minute when McCaughan was sent off for protesting too vehemently to the referee during an incident, but it was too late to have any impact on the game.