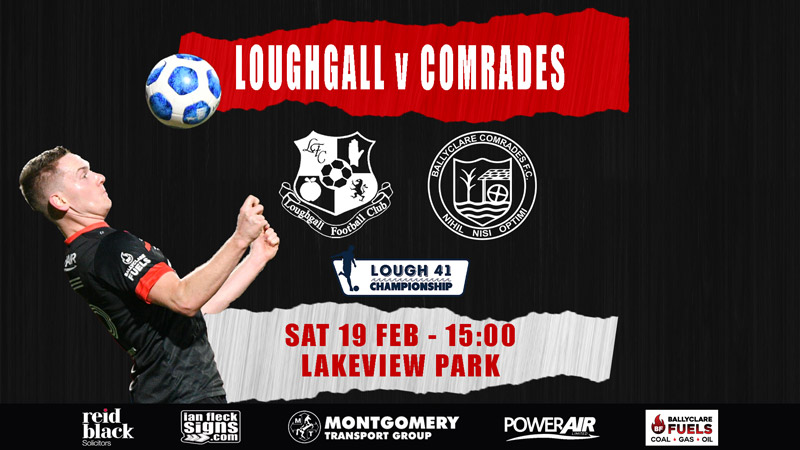 We travel to Lakeview Park tomorrow afternoon to take on Loughgall in our next Lough 41 Championship fixture.

The Villagers currently occupy 2nd spot on goal difference in the Lough 41 Championship. Last week they came out on top of a 5-goal-thriller with victory over Institute at the Brandywell. ‘Stute might have moved in front on 13 minutes when Caolan McLaughlin was upended by Berraat Turker but the Loughgall keeper redeemed himself by saving Gareth Brown’s subsequent spot-kick. The Villagers moved in front just before the half-hour mark through Caolan McAleer when the wind caught his shot to squeeze it past John Connolly. Institute levelled nine minutes after the break with the second penalty of the game, taken this time by Ian Parkhill and dispatched into the bottom corner. Loughgall regained the lead on the hour following a well worked move down the right flank culminating in a close-range finish from Nedas Maciulaitis. Back came Institute to level for a second time when McLaughlin beat Turker with a great first touch and finish. But Loughgall responded to ultimately secure the points with eight minutes to go when the ball fell kindly for Alan Teggart after an initial shot had been kept out.

Last week’s 2-1 defeat away to Harland & Wolff Welders keeps the Comrades in 8th position in the Lough 41 Championship. Ballyclare started brightly and created a number of half chances during the opening exchanges through Kyle Beggs and Caiolan Brennan. However, somewhat against the run of play, the deadlock was broken on 28 minutes when Gary Lavery fired the Welders in front with an effort from distance which went low and hard under keeper Richard Purcell into the bottom corner. Then, on the hour, Jonny Frazer made it 2-0 with a sweeping right foot finish from just inside the area after Scott McMillan had crossed from the right. The Comrades pulled a goal back ten minutes after that. Brennan sent a corner over from the left which Jason Johnston connected with to head home at the back post. Paul Harbinson understands the task ahead of the Comrades tomorrow afternoon and said his side will “raise their own tempo, raise their own bar, challenge themselves and hold themselves accountable, as will we (the management team) and hopefully we can turn things around into points.”

The last time these two sides met, Loughgall came away from Dixon Park with all 3 points after defeating the Comrades 3-0. Andrew Hoey opened the scoring for the Villagers after 18 minutes which was how it stayed until early in the second half when Jamie Rea doubled their advantage. Nathaniel Ferris then completed the scoring three minutes from time with a tap in from a Hoey cross. However, Ferris was sent-off not long after alongside Ballyclare’s Jason Johnston after the pair clashed.