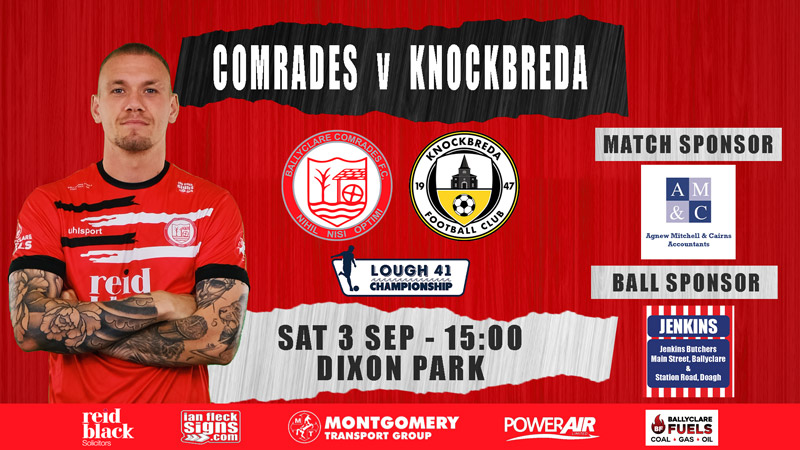 We welcome Knockbreda to Dixon Park tomorrow afternoon for our next Lough 41 Championship fixture.

A late Anthony Burns goal proved to be the difference between Knockbreda and Newington at ‘Breda Park last week. The 27-year-old struck right at the end of normal time to secure the points for the home side a few moments after the visitors had been reduced to ten men following Fra Brennan’s dismissal for a second bookable offence. Knockbreda currently occupy 5th position in the Lough 41 Championship table, just 1 point behind the Comrades.

The Comrades fell to their first defeat of the season last week as Ards claimed all three points with a 2-1 victory at Clandeboye Park. Matthew Tipton’s side needed just over sixty seconds to move in front when Ross Hunter pounced on a mistake at the back to open the scoring. It was a lead they held until eight minutes into the second half after Calvin McCurry latched onto a Kyle Beggs pass to lob keeper Alex Moore. However, Eamon Scannell bagged what proved to be the winner with six minutes remaining with a header following a counter attack down the right. The result keeps The Comrades on 7 points from the opening 4 games, sitting 4th in the Lough 41 Championship table.

The last time these two sides met in April 2022, they shared six goals in an entertaining encounter at Dixon Park. The Comrades moved in front after a quarter-of-an-hour when Adam McCart beat Daniel Oates with a bullet header but just a couple of minutes after that Ciaran Heggarty was on hand to level for ‘Breda. Ballyclare scored twice early in the second half to move firmly into the lead. Jason Johnston nodded home a Ryan Arthur free-kick before Liam Hassin tapped home a third after Kyle Beggs had sent the ball to the back post. ‘Breda reduced the deficit on 72 minutes through Karl Hamill on the counter attack before Lee McGreevy bagged the equaliser in stoppage time.