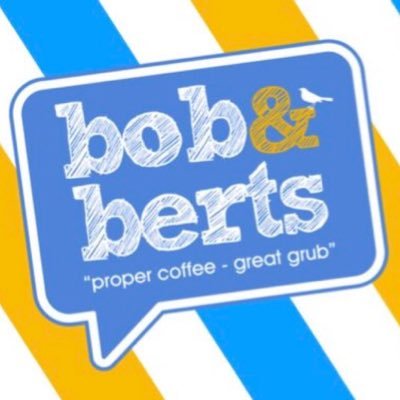 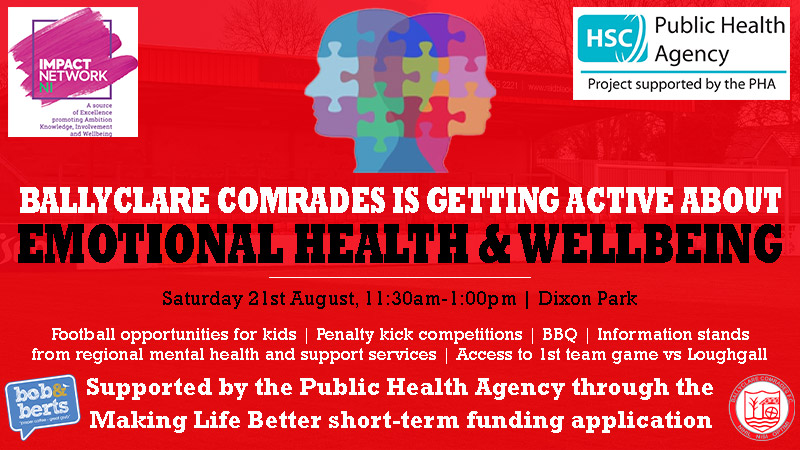 Ballyclare Comrades is Getting Active about Emotional Health & Wellbeing!

Ballyclare Comrades is Getting Active about Emotional Health & Wellbeing!

Please note: All children must be accompanied by an adult for this event!

This is a TAKE 5 STEPS TO WELLBEING EVENT:

We will have a number of voluntary/statutory agencies within the Z-card directory of services that will be available to discuss their support at this event and highlight how support can be accessed for these services. We hope to have a number of advice services to discuss access to grants for school uniforms and free school meals etc.

This event will be open to the whole community and aims to encourage Families/Carers/young people from the communities within the borough of Antrim/Newtownabbey to understand the importance/impact of mental health on emotional health and wellbeing; to access support and how using the Take 5 Steps to Wellbeing can assist them with this.

We will also have an unsupervised quiet space for children and adults to go to should they require this.

Asda are supporting this event through their Community Champion, so that we can have a BBQ at the event and all money raised is being donated to the local foodbank.

This event is being supported by Bob&Berts franchise. 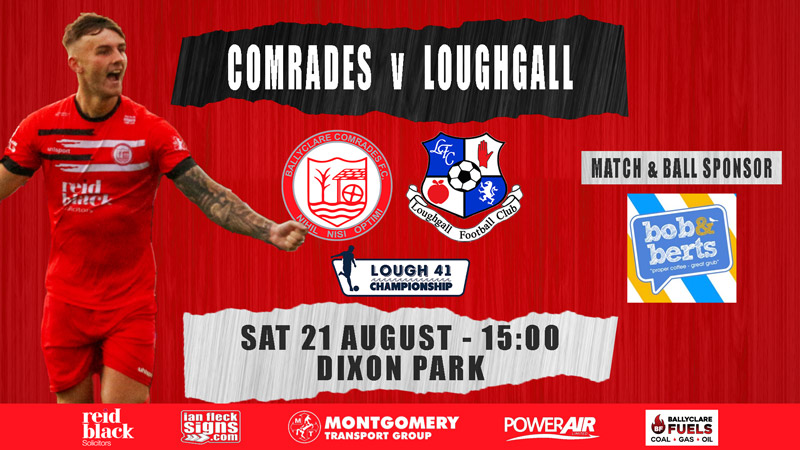 We invite Loughgall to Dixon Park tomorrow in our next Lough 41 Championship fixture.

Reminder to all supporters that there will be a fun-day event (Ballyclare Comrades is Getting Active about Emotional Health & Wellbeing Event) taking place at Dixon Park on Saturday. Free entry from 11:30am-1:00pm (attendance at the event will also grant you free access to the game vs Loughgall). You can read more about the event here.

Loughgall come into the game having won 2 and lost 1 of their opening 3 league games, much like the Comrades. They come to Dixon Park following a 2-1 victory over Dergview last Saturday with goals from Andrew Hoey & Nedas Maciulaitis. The visitors are tipped to be in and around the promotion places come the end of the season and so will be looking for all 3 points come Saturday.

The Comrades come into the game following a heavy defeat to Annagh United last Saturday. A nightmare of a first half saw Ballyclare go in at the break 4-0 down and with only 10 men on the pitch. Elliot McKim was shown red within the first 20 minutes of the game and will now miss tomorrow’s game. Despite facing a mountain of a task in the second 45, Paul Harbinson’s men were much improved after the break and had reduced the deficit to 3 through skipper, Chris Ramsey, until a 90th minute wonder-strike from Ruari McDonald restored Annagh’s 4 goal lead. The manager spoke after the game about the ‘heart-breaking’ scoreline but believes it has helped to pull the squad ‘out of the clouds’ following two big victories in the opening games of the season. “Loughgall are, what we would consider, title contenders and so it’s another massive massive game for us ” said Harbinson.

It was all square the last time these two sides met on 22nd February 2020 as the Championship match at Dixon Park ended in a 1-1 draw. The Villagers needed just five minutes to open the scoring when Ross Hunter headed home from six yards after Peter Campbell had crossed from the left. Ballyclare responded positively, striking the woodwork through Ciaran Dobbin before Gary Donnelly carved out the equaliser on 24 minutes with a close-range finish after meeting a free-kick floated into the box. The Comrades enjoyed more of the better chances as the game went on but it was Loughgall who came closest to snatching all 3 points in stoppage time, had it not been for a great stop from ‘keeper, Ben McCauley. 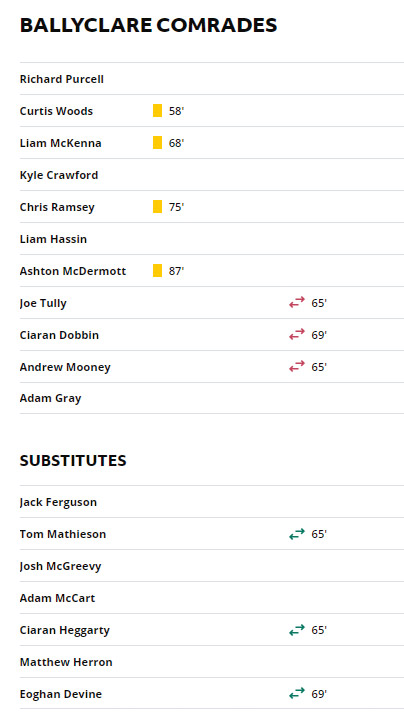 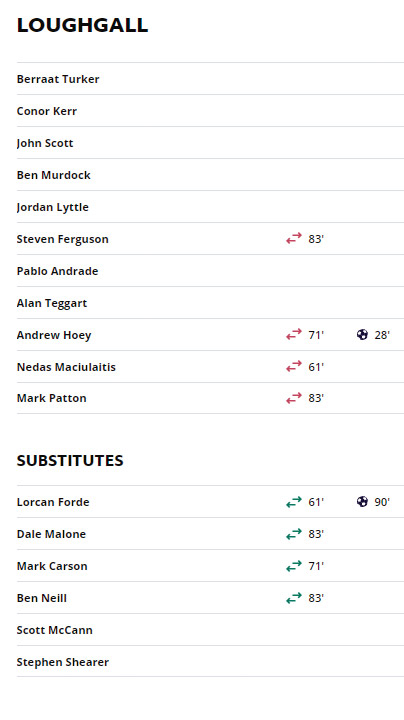 Comrades produced a flat display to slip to a defeat at home to Loughgall.

The first chance of the game fell to the visitors in the fourth minute when the ball was played in quickly to Maciulaitis whose resulting shot from sixteen yards was saved by the well-placed Richard Purcell.

The first quarter of the game was evenly balanced with chances at a premium. However, Comrades had an excellent opportunity to take the lead on 21 minutes when Andrew Mooney ran onto a long ball played from deep by Ciarán Dobbin and outpaced a covering defender to run in on goal, but he couldn’t beat the ‘keeper with his effort from inside the box.

Three minutes later Purcell had to be alert at the other end when Patton struck a dangerous cross / shot in from the left which the ‘keeper was forced to acrobatically tip over his bar.

Loughgall hit the front in the 28th minute. A ball over the top caught out the Comrades defence and it was then played in from the wing to Hoey who made space and struck an excellent finish just inside the post from the edge of the box.

From this point on the visitors had the better of the first half as Comrades couldn’t react to going behind.

Late in the half referee Stewart had to leave the field with a hamstring injury. He was temporarily replaced by one of his assistants until the break, with a new referee, McMaster, replacing him on the restart.

Four minutes into the second half the hosts threatened from a dangerous corner played in by Liam McKenna, but after a mad scramble in the goalmouth Loughgall were able to clear.

A minute later, at the other end, the visitors cane close when Lyttle headed over at the back post from a corner.

As the half progressed Comrades failed to unsettle the well-drilled Loughgall defence, and it was the visitors who looked to carry the most threat. On 63 minutes they should have double their lead when a ball drilled low across the six-yard box was met by Patton sliding in, but with the goal at his mercy his effort went wide from close range.

In the 65th minute Comrades were grateful to Richard Purcell who produced a wonder save to deny Forde who had got his head five yards out to a free kick played into the box.

The home side continue to frustrate their supporters and failed to test the Loughgall ‘keeper in the latter stages of the match.

Their disappointing day was completed a minute into injury time when the visitors sealed the victory with a second goal. They all too easily won the ball in the centre of the field from a Comrades clearance, and it was then played through to Forde who raced clear and finished confidently from fourteen yards.