We travel to Clandeboye Park tomorrow night to take on Ards in our next Lough 41 Championship fixture.

Ards are currently sitting 3rd in the Lough 41 Championship, with an identical start to the season as the Comrades with 5 wins, 1 draw and 2 losses in their opening 8 games. They come into tomorrow night’s game following a 2-1 defeat away to Institute last Saturday. Institute stunned Ards with a dramatic stoppage comeback to claim victory at the Brandywell. The visitors, going into the game in second spot, moved in front on 29 minutes after Ross Arthurs smashed the ball home following a scramble in the box. It was a lead they held for almost the remainder of the game until that heart stopping finale despite playing the remaining quarter-of-an-hour with ten men following Christopher Crane’s dismissal for an off the ball incident involving ‘Stute’s Joel Gorman. ‘Stute levelled in the 90th minute in somewhat bizarre circumstances. Ards keeper Brian Neeson came out to punch a corner clear but the ball came off Jack Millar and looped back over Neeson into the net. Then, in the fifth minute of added time, Brendan McLaughlin fired ‘Stute’s winner into the roof of the net amid unbelievable scenes. Ards will be looking to get back to winning ways at Clandeboye Park tomorrow night.

The Comrades have been in fine form recently with 4 wins in their last 6 outings. The only defeat in that period has been to Danske Bank Premiership champions, Linfield. Tomorrow night’s game is a quick turnaround from Tuesday night’s victory over Queen’s University in the ToalsBet.com Co Antrim Shield. Having played Queen’s 3 times now this season, manager Paul Harbinson spoke of the challenge to “motivate players and get them up for a game where they are naturally psychologically thinking that they’ve already won this and it should be an easy game. But it’s never an easy game, Queen’s always come with a good plan, they play good football and they were really hard at it. So it’s a psychological one and thankfully we were on the right side of it.” Matthew Herron grabbed his first competitive goal for the club on Tuesday evening, while Andrew Mooney took home the Man of the Match award following his 2 goals on the night. Speaking on the quick turnaround for tomorrow night’s upcoming fixture, Paul Harbinson said “It’s a really really quick turnaround, we’ve done our homework as we always do and we’ll hope that the information that we’ve got is the right information. We’re going there with as much ammunition as we ever do, yes it’s a quick turnaround but that’s football, get on with it.” Full back, Ian Fletcher, is set to miss the next couple of weeks following an injury to the head last Saturday, while the Comrades manager is hopeful that Howard Beverland will be back in contention for tomorrow night’s squad.

January 2020 was the last time these two sides met where they played out a 2-2 draw at Clandeboye Park. The Comrades moved in front after 20 minutes when a Jordan Malone free-kick into the box was adjudged to have been handled by William Armstrong with Joe Tully stepping up to convert from the spot-kick that followed. Kym Nelson levelled for Ards just after the half-hour mark with a header from six yards after he was picked out by a set piece from the left. Ballyclare regained the advantage a couple of minutes from the break with Tully’s second of the afternoon, a lob over keeper Brian Neeson after Tom Mathieson had delivered a long ball forward. Ards might have restored parity early in the second half when Michael McLellan sent a long range effort against the crossbar but they did equalise again just before the hour thanks to Craig McMillen’s rifled finish after a David McAllister effort rebounded out to him. 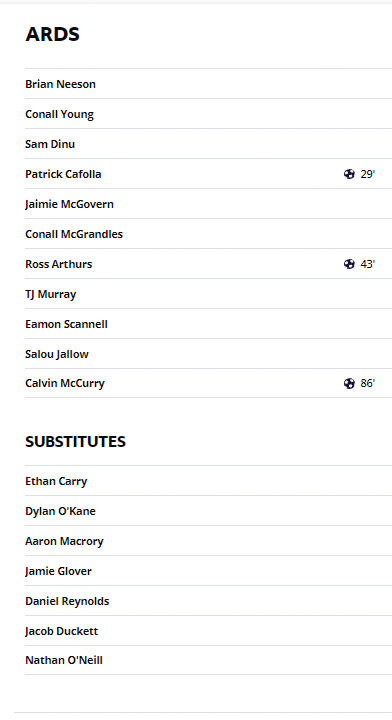 Comrades suffered a disappointing evening at Clandeboye Park as they were well beaten by Ards.

Things started brightly enough for the visitors, and they came close to taking the lead in the 3rd minute when a spectacular attempt from the edge of the centre-circle by Curtis Woods almost caught out ‘keeper Neeson, who was slightly off his line and had to stretch to tip the ball over the bar.

This was as good as it got for Comrades in the first half as Ards soon took control, dominating the attacking possession. However, they weren’t able to create any real chances until the half-hour mark when they took the lead. A ball played into the box wasn’t cleared and fell to Cafolla who drilled an excellent finish into the net from the edge of the box.

Comrades were now hanging on to prevent sustaining more damage before the break. They were under constant pressure and, when they did get the ball, struggled to hold on to it for any length of time.

On 42 minutes, in a rare attack, the visitors did have a half chance when a cross played into the box from the right saw the ball loop up off a defender towards Ciarán Dobbin, but he couldn’t generate the power to really test Neeson from 7 yards.

A minute later the hosts doubled their lead. A well-worked move opened up the Comrades defence and created the chance for Arthurs to blast an unstoppable finish past Jack Ferguson from 16 yards.

The second half began with a great chance for Ards to add to their lead. A cross from the right presented Arthurs with a free header 8 yards out, but he sent the ball over the bar.

Comrades began to get into the game and their second half performance was an improvement on that of the first. They had a chance in the 53rd minute to reduce the deficit. Tom Mathieson hooked a high ball into the box which the ‘keeper failed to deal with, presenting a chance for Andrew Mooney at the far post, but he couldn’t keep his headed effort down and it went over the bar.

The visitors’ real chance to get back into contention came on 70 minutes when their best move of the game ended with Gary Donnelly slipping a pass through to set Andrew Mooney free in the box, but his resulting powerful rising strike came back off the bar.

Ards finished off a deserved win with another goal late in the game. Comrades were exposed by a quick break up-field which beat the offside trap and the ball was played low into the box by Jallow, setting up McCurry to finish from 10 yards.