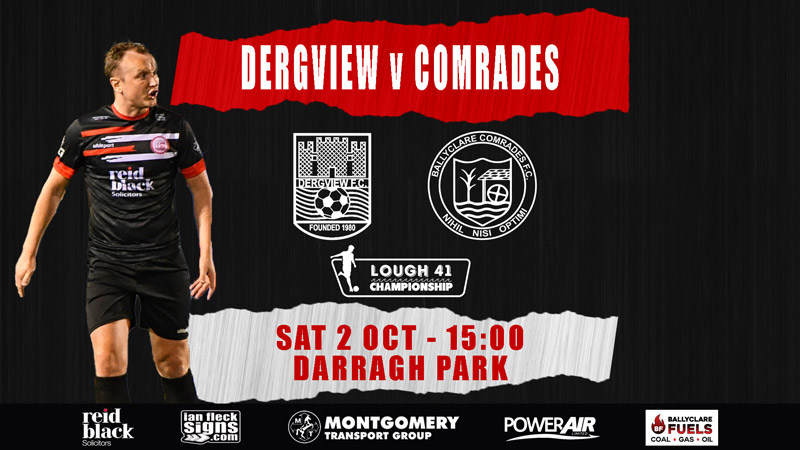 We travel to Darragh Park tomorrow afternoon to take on Dergview in our next Lough 41 Championship fixture.

Dergview currently sit 9th in the Lough 41 Championship, 5 points behind the Comrades in 5th. They go into tomorrow’s game following a 3-2 defeat away to Knockbreda last Saturday. Goals from Benny Igiehon and Cathal Farren in the second half threatened to undo Knockbreda’s 3-0 lead from the first half but the hosts were able to hold out. Dergview have only been beaten once at home this season, a 2-0 defeat to Newry City, and recently took Danske Bank Premiership side, Carrick Rangers, to extra time in the Bet McLean League Cup. Manager, Tommy Canning, will be looking for a reaction from his side following last week’s defeat.

The Comrades go to Darragh Park following last week’s disappointing 3-0 defeat away to Ards. After a somewhat cautious start to the game at both ends, it fell to Patrick Cafolla to open the scoring just before the half-hour mark when he found the top corner from around 20 yards from goal. Ards then doubled their advantage on 43 minutes through Ross Arthurs to take a commanding lead into the break. Andrew Mooney came closest in the second half for the Comrades when he rattled the crossbar. However, Calvin McCurry made sure of the points for Ards four minutes from time. Paul Harbinson made no excuses following the game and said his side were poor and must improve on consistency. Speaking on tomorrow’s trip away to Dergview, Paul Harbinson said “We’re going to have to go and work hard on our competition as Dergview have been playing fantastic football, in the middle of the park they dominate, and we didn’t do that tonight (against Ards) and haven’t done that for a while. We need to question ourselves and look at what we do next”.

January 2020 was the last time these two sides met in the Championship. Two quickfire goals were enough for the Comrades to get the better of Dergview at Dixon Park. The sides traded chances during the opening phases with Joe Tully dragging an effort wide for Ballyclare while Paul Smith just failed to hit the target for the visitors. Dergview keeper, Alan Buchanan, was then called into action to turn a Gary Donnelly shot around the upright while Jordan Malone headed just over later in the first half. Ciaran Dobbin came closest early in the second half when his header from a Donnelly corner was touched onto the crossbar. But, on 57 minutes, the Comrades eventually found a way through when Donnelly dinked Buchanan from eight yards after connecting with a Tully through ball. And, around sixty seconds later, it was 2-0 when Tully got his name on the scoresheet with a 20-yard drive. Dergview attempted to hit back; Emmett McNabb fired just wide from six yards while Smith was denied by Ben McCauley. The home keeper came to Ballyclare’s rescue again in the closing moments to thwart Smith again, but Dobbin almost added a third for the home side in stoppage time when his effort came off the keeper and onto the bar. 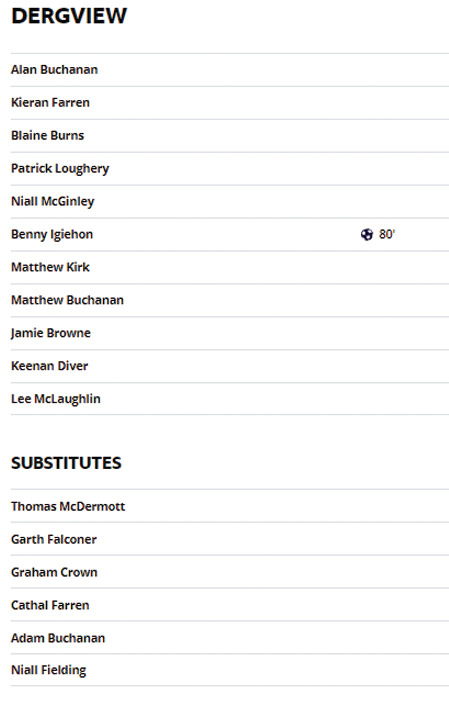 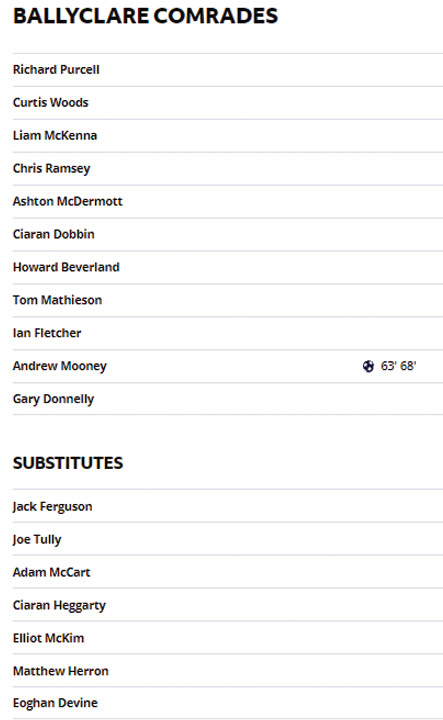 Despite a nervous finish, two goals in the second half from Andrew Mooney were enough to secure the points for Comrades away to Dergview.

The first half was evenly fought with neither side able to assert any dominance.

The first effort of note came in the 7th minute when Curtis Woods tried a shot from 35 yards which went just over the bar. Then on 14 minutes the home side threatened for the first time when Igiehon struck an effort from 30 yards which went narrowly past the base of the post.

A minute later Dergview got a shot on goal when space opened up for McGinley to shoot from the edge of the box, but his effort was comfortably saved by Richard Purcell.

At the other end, in the 18th minute, Liam McKenna came close with a free kick hit from 30 yards out which flew narrowly wide of the target.

Play became increasingly scrappy as both sides struggled to build anything. However, in the 33rd minute Igiehon showed good feet to make space for a shot from 12 yards, but his effort hit the side-netting.

The best Comrades could muster late in the half was a decent Andrew Mooney headed effort from 12 yards from a Liam McKenna cross, but ‘keeper Buchanan was not unduly troubled.

The initial stages of the second half saw the disjointed pattern of the game continue, although there were a couple of half-chances for either side. Firstly, on 56 minutes, Loughrey slid in to meet a dangerous ball played into the box, but his first-time effort from 10 yards flew wide of the goal. Then three minutes later a Liam McKenna corner found Andrew Mooney at the back post, but he couldn’t get enough on it to beat the ‘keeper who parried the ball away.

It took a moment of quality to break the deadlock and it came in the 65th minute. Tom Mathieson produced a mazy run on the right and then played in a super cross which found Andrew Mooney who had eluded his marker to head powerfully in from 6 yards.

Four minutes later Comrades profited from a mistake at the back from the hosts, when a loose pass was picked up by Andrew Mooney who calmly made space to fire in his second goal from 16 yards, giving the ‘keeper no chance.

The pressure was now on Dergview to try to quickly get back into the game. In the 76th minute they did have a half-chance when Kirk headed on target from 10 yards, but Richard Purcell was well-placed to save.

However, in the 81st minute the home side did reduce the deficit when a cross played in from the right sent the ball to the back post where Igiehon bundled it home from close range.

This set up a nervous finish for the travelling supporters, but despite a few dangerous crosses and corners flying across the box Comrades were able to avoid any further damage. Indeed, they had a chance to restore a two-goal cushion in the 86th minute when Dergview lost the ball deep in their own territory and Tom Mathieson slipped it through to Ciaran Heggarty arriving in to the right-side of the box. However, his resulting effort lacked the power to trouble the ‘keeper.