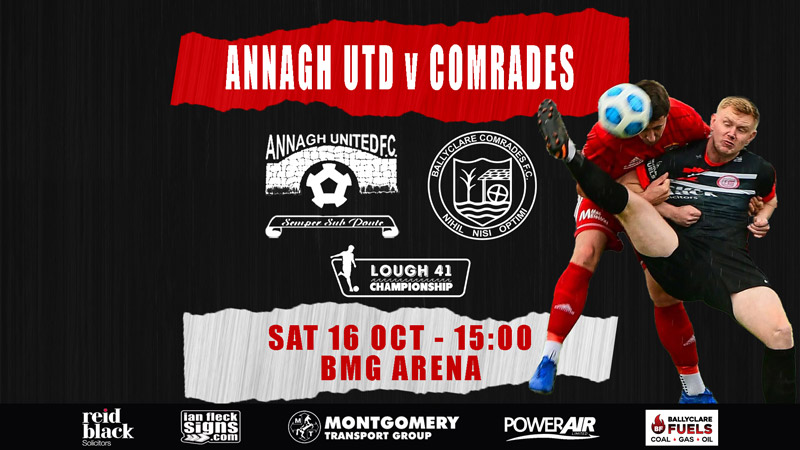 We travel to the BMG Arena tomorrow afternoon to take on Annagh United in our next Lough 41 Championship fixture.

Annagh currently sit in 4th position in the Lough 41 Championship, just 3 points behind the Comrades. They go into tomorrow’s game following Tuesday night’s 2-1 AET victory over Armagh City to progress into the semi final of the Mid Ulster Cup. Last Saturday, they were in league action at The Dub where they took on hosts, Queen’s University. The visitors moved into the lead after just seven minutes when Stephen Murray chipped keeper Daniel Devine from an acute angle after latching onto a Ruairi McDonald flick. And Ciaran McGurgan’s side doubled their advantage five minutes before the break courtesy of Ryan Harpur’s tap in after the ball fell loose when Lee Upton’s initial header came back off an upright. The two first half goals were enough for Annagh as the game finished 2-0.

The Comrades travel to the BMG Arena following last Friday night’s 1-0 victory over Dundela at Dixon Park. Liam McKenna popped up with yet another important goal as the visitors made a mess from a throw-in deep in their own territory and an attempted clearance fell to Andrew Mooney near the by-line. He then played the ball across to McKenna who was free to knock it into the net from close range. In the end, the one goal was enough to give Comrades the victory in a tight match where their defensive strength on the night held them in good stead. Speaking on his side’s resolute defending on the night, Paul Harbinson said “How often have we spoken about how important it is to be solid at the back and have leaders on the pitch? With Howard Beverland and Chris Ramsey, you’ve two leaders who just want it. I mean there was times they were fighting each other for the ball, to win headers and to win tackles. Curtis Woods and Ian Fletcher came in and did their jobs and Ashton McDermott in front was really solid”. Speaking on tomorrow’s trip away to Annagh, Harbinson expects a “really, really tough battle on the tighter 3G pitch, so we’ll have to be focused”. The Comrades manager will be looking to avoid a repeat of August’s tie against Annagh which saw the Comrades 4-0 down at the break and down to 10 men. He spoke about the need to “remind the players of what we did, the mistakes we made and how easy we made it for Annagh, with no disrespect to Annagh, they’re doing extremely well”. With the first full set of Championship games now completed, the Comrades occupy third spot in the table, just 1 point behind Newry in second and 3 points behind Ards who are the current league leaders.

The last time these two sides met, a disastrous first-half Comrades performance helped Annagh storm to a comprehensive 5-1 home victory. After an even opening few minutes, the pattern for the rest of the half was set in the 7th minute when Jack Ferguson attempted to clear a high ball played into the box but lost out to Duffin who got to the bouncing ball first and then had the simple task of finishing into the empty net. Things got much worse for Comrades on 18 minutes. Elliot McKim didn’t get enough on a header back to the ‘keeper allowing Murray to nip in and McKim then hauled him back and got sent off for denying a goal-scoring chance. In the 29th minute they doubled their lead, when they opened up the Comrades defence down the right before Duffin played the ball across for Murray who finished with a fine first-time effort from 16 yards. Three minutes later it was 3-0. Jack Ferguson was penalised for picking up a back pass and from the free kick inside the box Comrades weren’t alert enough, as the ball was played to the unmarked Campbell who finished from 12 yards. Comrades’ horror first half was rounded off in the 42nd minute with the concession of another goal. Claiming for a foul, they lost the ball cheaply on halfway, with Taylor taking full advantage to run forward and finish very well with a low shot from the edge of the box. The visitors’ improved second half performance earned them a consolation goal in the 78th minute when good persistence from Ciaran Heggarty and Chris Ramsey at the edge of the box allowed Ramsey to break through and drill the ball in from 11 yards. Annagh weren’t finished however and a minute into injury-time Ruairi McDonald struck a great low shot from 25 yards into the bottom corner of the net past the despairing dive of Ferguson. 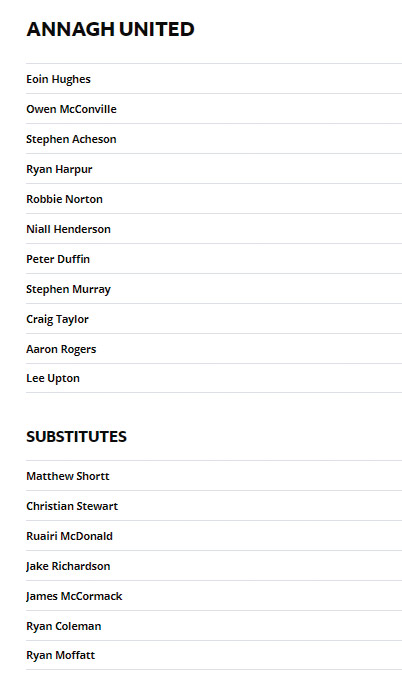 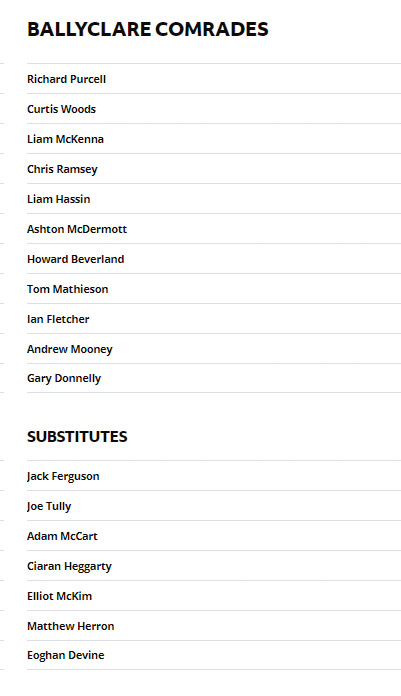 Comrades avenged a heavy defeat at Annagh earlier in the season, with an impressive performance giving them all three points to keep them in contention at the top of the table.

Paul Harbinson’s men started the game on the front-foot and soon got their reward. In the 6th minute their excellent pressing paid off when Liam McKenna robbed an opponent inside the Annagh half and fed the ball forward to Andrew Mooney. The striker could have taken on a shot but had the awareness to see Liam Hassin arriving in a better position on the left side of the box and fed him a perfectly weighted ball which Hassin fired into the roof of the net from 12 yards for his first goal for the club

Comrades continued to look lively. On 13 minutes they created a half-chance when Gary Donnelly clipped the ball into the box to be met by an Andrew Mooney header which went just over from 10 yards.

The second goal for the away team came in the 19th minute. A corner played low into the box saw it ricochet about the box and then fall to Andrew Mooney who drilled it in from 7 yards.

The two-goal lead for Comrades didn’t last long and five minutes later the hosts were right back in the game. A dangerous long-throw into the box from Taylor, a feature throughout the game, saw Ashton McDermott head into his own net, giving ‘keeper Richard Purcell no chance.

Annagh were buoyed by this goal and for the rest of the half looked dangerous and capable of an equaliser. However, the Comrades defence was well organised and was able to prevent clear-cut chances being created. Indeed, probably the best chance of the latter stages of the first half fell to the visitors in the 43rd minute. A training ground corner saw Liam McKenna pull the ball back to the edge of the box where Chris Ramsey struck a great shot which forced ‘keeper Hughes to make a good save, turning the effort over the bar.

A minute later, at the other end Annagh came close when a ball played forward into the box was taken down well by Duffin who then looked to round Purcell, but the Comrades ‘keeper did well to grab the ball cleanly.

The early part of the second half was evenly balanced with no chances of note. However, Comrades stepped things up and doubled their lead in the 64th minute. A Gary Donnelly free kick forced Hughes to make a save and the ball rebounded out to Ian Fletcher who the struck a fine controlled effort wide of the keeper and inside the far post from 10 yards, with Ashton McDermott following in to make sure it had crossed the line.

Two minutes later the hosts almost pulled a goal straight back when a scramble in the box ended with Norton hitting a rising shot which came back out off the underside of the bar.

Following this narrow escape, the visitors controlled the game and looked the more likely to add to the score-line. They threatened on 70 minutes when after a corner Ian Fletcher did well to hook the ball back across the box where it broke to Tom Mathieson 16 yards from goal. His resulting shot looked on target before being deflected wide off a defender, with Comrades claims for handball waved away by the referee.

The destination of the points was put beyond doubt in the 86th minute. With Annagh pushing men forward, Gary Donnelly set Liam Hassin clear to run free from the halfway line and, when he reached the box, he squared unselfishly to Ciaran Heggarty who had arrived in support and was able to finish confidently from 10 yards.