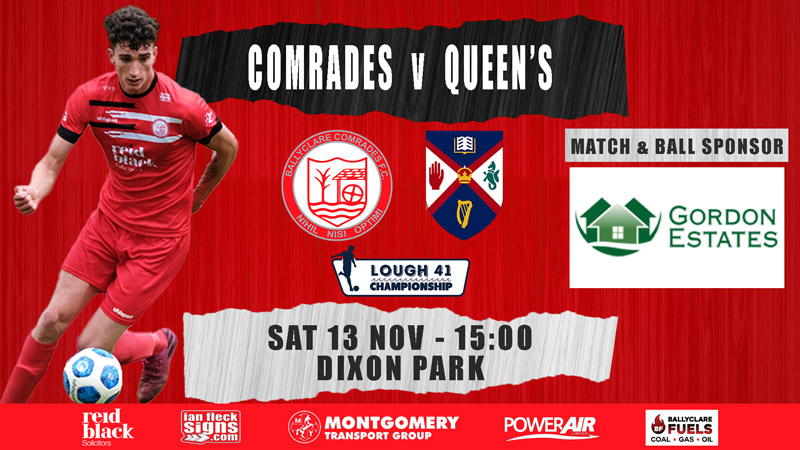 Queen’s University’s season is still yet to really get going. With 15 games played, the students occupy bottom spot in the Lough 41 championship with only one victory on the board. Last week, Queen’s faced up against Ballinamallard and were on the wrong end of a 3-0 score line. BJ Banda opened the scoring for Harry McConkey’s side after 12 minutes and almost added another towards the end of the first half only to fire into the side netting. After the break a Jason McCartney cross skimmed the crossbar while Joshua McIlwaine saw a goalbound effort deflected away for a corner. However, McIlwaine did find the net to double Ballinamallard’s lead with just over a quarter-of-an-hour remaining before substitute Duwayne McManus completed the scoring with five minutes to go.

The Comrades failed to build on the momentum from last Tuesday’s victory over Crusaders as they slipped to fifth spot in the table on Saturday after losing by the odd goal in five away to Knockbreda. The home side moved in front after half-an-hour through Peter McDermott, a lead they held until just before the break when Liam McKenna levelled with a finish into an empty net. ‘Breda regained the advantage early in the second half thanks to Ethan Devine and went further ahead on 56 minutes when Karl Hamill knocked home number three. Joe Tully reduced the deficit midway through the second half from a Matthew Herron pass but Knockbreda held on to claim the points. Paul Harbinson will be looking for his squad to get back to winning ways, as that’s now only 1 point picked up from the last 9 available.

This is just the 4th time these two sides have met this season. The Comrades have got the better of Queen’s on all occasions to date, with the most recent being a 3-1 home victory in the ToalsBet.com Co Antrim Shield. The Comrades opened the scoring on 22 minutes as Curtis Woods got forward up the right wing and sent in a perfect cross to the far post where Andrew Mooney was there to head in comfortably from 5 yards. The home side were now playing some good attacking football, but they were rocked by an equaliser on 40 minutes. The ball was lost in midfield and ended up being played through to Glackin who calmly slotted it past the ‘keeper from inside the box. In the 70th minute Andrew Mooney did very well to hold the ball up on the wing and then feed Ciaran Heggarty who then managed to slip the ball through to Matthew Herron breaking into the box. Herron then produced a confident finish past the advancing ‘keeper from 12 yards for his first competitive goal for the club. Three minutes later Comrades increased their lead. A well-flighted Elliot McKim corner to the back post found the head of the unmarked Andrew Mooney who nodded in from close range. 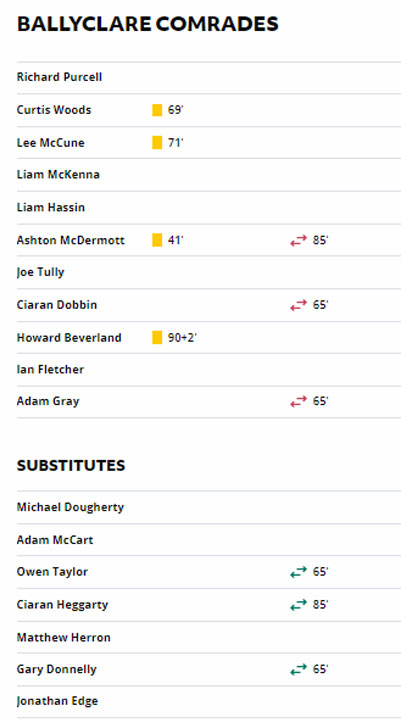 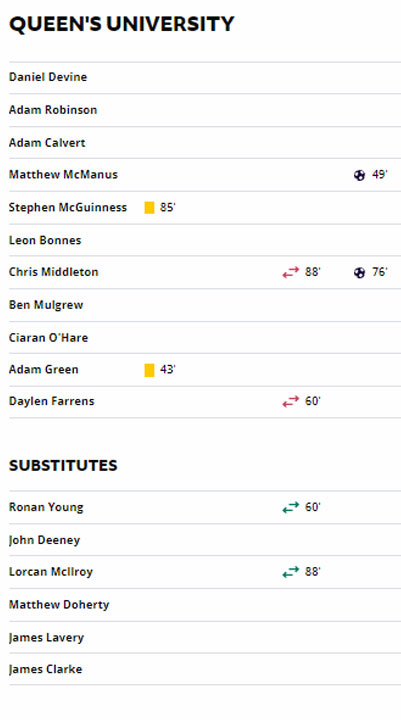 Comrades’ worrying form slump continued with a defeat at home to bottom of the table Queen’s University.

Paul Harbinson’s men started strongly and could have gone ahead in the 7th minute. A cross played in from the left by Lee McCune found Liam Hassin in space in the box and he struck an effort on target from 12 yards. However, he was denied by a fine save by ‘keeper Devine.

The home side continued to have the bulk of the attacking possession and on 17 minutes they threatened again when Liam McKenna sent in a well struck shot from 16 yards, but Devine was well placed to save.

Ten minutes later McKenna came close again when he hit a free kick from 25 yards narrowly over the bar.

Towards the end of the first half Comrades tested the visitors’ ‘keeper again on two occasions. In the 44th minute from a corner the ball broke to Ian Fletcher at the edge of the box, and he fired in a great effort which forced Devine to make an excelllent save to tip the ball over the bar. Then a minute later Liam McKenna did well to get past a defender on the by-line inside the box before hitting a shot from a difficult angle which Devine was able to keep out at his near post.

There had been little sign of Queen’s threatening but four minutes into the second half they took the lead. A free kick was played into the box and McManus got the barest of touches with his head to send the ball into the back of the net.

The hosts tried to react but were not convincing against a stubborn Queen’s side. However, they did have a chance on the hour when Howard Beverland played an incisive pass to set Curtis Woods free and the raiding full-back surged towards the box before striking a shot from 16 yards which flew wide of the near post.

The home side’s best chance to get back on level terms came in the 70th minute when a great cross played in by Owen Taylor to the back post found Liam McKenna arriving and he looked set to score from close range, but he sent his header wide of the target.

A miserable afternoon for the home supporters got worse on 76 minutes when Queen’s double their lead. A penalty was awarded after O’Hare was brought down inside the box. Middleton stepped up to take the penalty but sent his effort wide of the post only for the referee to order a re-take. With his second effort Middleton was denied by a Richard Purcell save, but the ‘keeper was out of luck when the penalty taker was first to the rebound and slotted the ball home.

In the 85th minute Joe Tully flicked a header just over from 8 yards after Lee McCune had played the ball into the box. However, other than that there was little sign of Comrades mounting a comeback as they slumped to a dispiriting defeat.