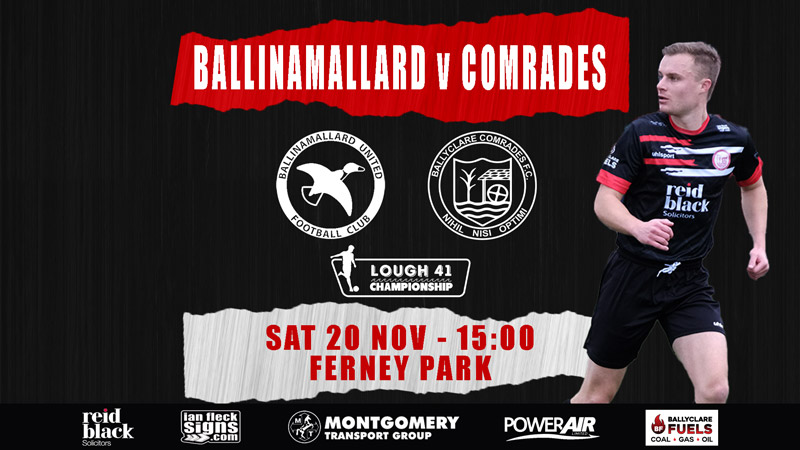 We travel to Ferney Park tomorrow afternoon to take on Ballinamallard in our next Lough 41 Championship fixture.

The Mallards currently occupy 5th spot in the Lough 41 Championship table, just 1 point ahead of the Comrades. Last week, they lost out to Newry City who stretched their lead at the top of the Lough 41 Championship following a two-goal victory at The Showgrounds. Declan Carville opened the scoring for Darren Mullen’s side on 27 minutes when the ball was laid off for him to slot home unmarked from just outside the six yard box. And that was how it stayed until four minutes into stoppage time at the end of the game when Fra Brennan found Jimmy Walker on the edge of the area and he sent a low drive below Rory Brown into the net.

The Comrades’ poor run of form continued last week with a 2-0 home defeat against Queen’s University. Despite the eventual outcome Ballyclare enjoyed numerous chances during the scoreless first half with Queen’s keeper Daniel Devine doing well to deny Lee McCune, Liam McKenna and Ian Fletcher at various points during the opening 45 minutes. Queen’s moved in front just four minutes after the break through Matthew McManus who got his head to a free-kick delivered from wide on the flank to glance the ball past Richard Purcell. The home side attempted to get back into the game but, once again, Devine was equal to efforts from McKenna and Joe Tully. The visitors doubled their advantage, and made sure of the points, with just under a quarter-of-an-hour remaining. Awarded a spot-kick, Chris Middleton’s initial effort had to be retaken but Purcell saved the second attempt only for Middleton to ultimately find the net on the rebound. The result sent the Comrades into the bottom half of the table for the first time this season. However, the middle of table is extremely tight with only 3 points separating the Comrades in 7th position and Ards in 2nd position.

The last time these two sides met was on the opening day of the season, when Ballyclare Comrades bounced back from going behind to record a comprehensive 5-1 victory at Dixon Park. Darragh Byrne opened the scoring for the Mallards with just over a quarter-of-an-hour on the clock when he cut inside on the right and fired into the bottom corner. However, Ballyclare responded immediately through Adam Gray with a finish from just inside the box before, three minutes after that, Joe Tully edged the home side into the lead with a six-yard header from Liam McKenna’s corner. McKenna delivered the set piece again a couple of minutes after the break for Ciaran Dobbin to extend Ballyclare’s lead. And Dobbin struck again on 54 minutes for his second of the afternoon, a strong strike from 20 yards. Andrew Mooney completed the scoring with 20 minutes remaining with a tap in moments after coming off the bench. 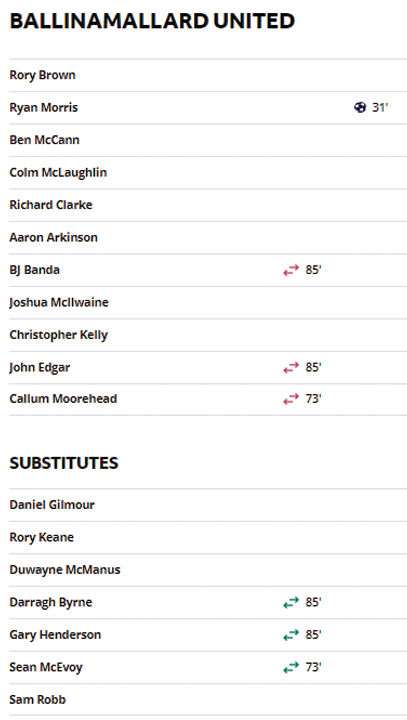 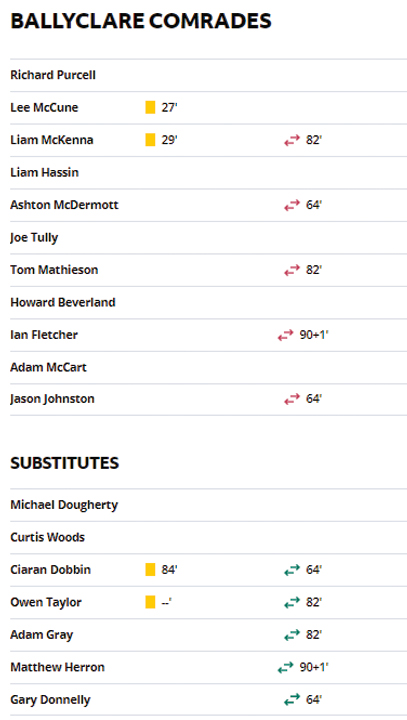 Despite a much-improved performance compared to recent weeks Comrades came home from their trip to Fermanagh with nothing to show for it.

The hosts started on the front foot, and they had the first attempt in the 5th minute when Banda shot wide of the far post from the edge of the box.

Comrades soon began to get into the game. Their first effort was in the 10th minute when Liam McKenna made space for a shot from the left side of the box which flashed just wide of the far post. Then, two minutes later, McKenna had a much better chance when a cross played in by Ian Fletcher found him unmarked in the box, but his header from 7 yards went wide of the target.

In the 29th minute Richard Purcell had to be alert to save a shot from Banda at his near post. Then at the other end a minute later Comrades had a penalty appeal turned down when Joe Tully looked to have been pulled down just inside the box.

The deadlock was broken on 32 minutes when Comrades conceded a very unfortunate goal. A corner was played to the back post where Morris got his head to it directing the ball back across goal. Richard Purcell stuck his leg out to block it, but the ball rebounded off him and into the net.

Mallards had a chance to double their lead late in the half when in the 45th minute Moorehead got a shot away from 13 yards before a tackle came in, but his effort went wide of the near post.

The second half saw the visitors largely making the running. On 52 minutes a swift break up-field ended with Joe Tully releasing raiding full-back Lee McCune who struck a shot from 14 yards which was blocked on the line. The ball rebounded up back towards the Comrades man and he headed on target only to see his effort again cleared off the line.

At the other end, the home side still posed a threat and in the 63rd minute Richard Purcell had to block with his legs after Moorehead got in a shot from an angle 7 yards out after a dangerous counterattack.

Comrades were playing some good football, but not making the number of chances they might have wanted to against a tight Mallards defence. However, on 69 minutes they came close when Joe Tully hit a spectacular volley from 22 yards which dipped just over the bar.

It just was not to be Comrades’ day and this was clear a minute into injury-time when recently introduced substitute Matthew Herron got onto a high ball down the middle and hit a shot from just outside the box only to see it take a deflection and strike the bar.