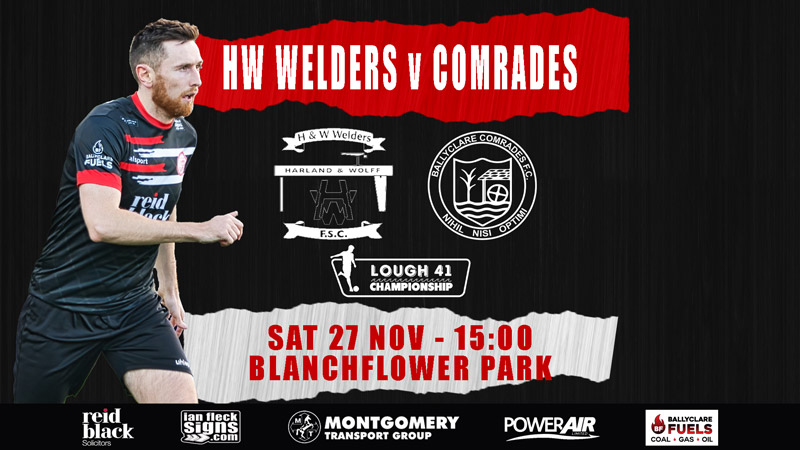 We travel to Blanchflower Park tomorrow afternoon to take on Harland & Wolff Welders in our next Lough 41 Championship fixture.

The Welders currently occupy 6th position in the Lough 41 Championship, just 2 points ahead of the Comrades. Last Saturday saw the Welders just pipped by Annagh United in a 5-goal thriller at Blanchflower Park. The Welders moved in front on 17 minutes through Alan McMurtry after Annagh keeper Eoin Hughes fumbled his shot before dropping it over the line. Annagh levelled just after the half-hour mark when Ruairi McDonald sent over a cross which Stephen Murray rose to head past Ben McCauley. McMurtry restored home advantage just before the break with a near post finish but, nine minutes into the second half, Annagh levelled again after Murray cut the ball back for Lee Upton to touch home. However, the visitors moved in front for the first time with what proved to be the winner on 62 minutes after Murray again turned provider to tee up Craig Taylor to beat McCauley for a third time.

Despite last Saturday’s much-improved performance compared to recent weeks, the Comrades came home from their trip to Fermanagh with nothing to show. The deadlock was broken on 32 minutes when a corner was played to the back post where Morris got his head to the ball directing it back across goal. Richard Purcell stuck his leg out to block it, but the ball rebounded off him and into the net. The second half saw the visitors largely making the running, but it was not to be Comrades’ day and this was clear a minute into injury-time when Matthew Herron got onto a high ball down the middle and hit a shot from just outside the box only to see it take a deflection and strike the bar. The result keeps the Comrades in 7th position in the Lough 41 Championship. Following the game, manager Paul Harbinson was feeling “upbeat” as he felt “the team came together and put in a much-improved performance”.

The last time these two sides met was back in August where the Comrades ran out 1-0 winners at Dixon Park. With the opening 85 minutes of the game being goalless, the game looked to be heading to a deadlocked finish until Liam McKenna cut into the box from the left and struck an unstoppable shot from 14 yards which rifled into the roof of the net to the delight of the home supporters. This proved to be the winner as the hosts comfortably saw out the remaining minutes to seal the victory.

On their first visit to Blanchflower Park, the impressive new home of the Welders, Comrades ended a run of league defeats when a late comeback salvaged them a point.

After a quiet opening the first chance of the game fell to the hosts in the 14th minute when Boyd received the ball in space at the edge of the box, but his effort went over the bar.

Comrades had a chance on 20 minutes when a link up on the left between Ciarán Dobbin and Adam Gray ended with Gray surging into the box and getting in a decent position to shoot, but his resulting effort was scuffed harmlessly wide of the near post from 12 yards.

For most of the first half play fluctuated from end to end with neither side exerting any dominance, but in the later stages Welders began to look the more threatening of the sides. On 36 minutes they came close to opening the scoring. They somehow couldn’t finish during a desperate goalmouth scramble and then when the ball was cleared out on to Davidson at the edge of the box, he was unfortunate to see his effort come back off the crossbar.

Three minutes later however the home side grabbed the lead. Comrades were exposed down their right side and the ball was played in low into the 6-yard box where McMurtry was there to slam it into the net.

The visitors tried to react and had a glimpse of a chance in the 41st minute. Tom Mathieson darted in from the left before playing the ball into Jason Johnston inside the box who guided it on target from 9 yards, but without the power to trouble ‘keeper McCauley.

The second half started ominously for Comrades with Welders bossing the early exchanges. In the 50th minutes McMurtry got in a shot from just inside the box which the visitors were relieved to see deflected wide of the target.

Welders doubled their lead on 65 minutes when they caught the Comrades defence short-handed, and the ball was played across to Boyd who drilled it wide of the ‘keeper and inside the far post from the left side of the box.

At this stage there looked to be little chance of a comeback from Comrades as they had shown little in the way of threat during the second half, but things were soon to change.

They got a lifeline on 71 minutes when they pulled a goal back. After the ball was cleared from a corner it was played back into the box and broke out to Liam Hassin 20 yards out who then curled a fine finish into the net, giving the ‘keeper no chance.

Now the tide turned, and it was Comrades, prompted in midfield by impressive substitute Gary Donnelly, who began to dominate, whilst the previously comfortable home side looked nervous.

Time was ticking away, and it looked as if Welders might hold on for the win. However, in the 85th minute the visitors pounced to level the scores. Tom Mathieson got possession inside the box from a throw-in and did superbly well to beat a defender on the by-line before pulling the ball back into the danger zone where Matthew Herron was there to finish from 5 yards and cap an impactful performance since his instruction from the bench.

A minute later Comrades came close to snatching all three points when Liam Hassin danced past a couple of challenges cutting in from the left side of the box, but his effort from 7 yards was blocked by McCauley who was alert to come out and narrow the angle.

In the 89th minute Comrades won a free kick in a dangerous position 22 yards out, but Gary Donnelly’s attempt was saved by McCauley who anticipated well.

The hosts missed a great chance to win the game on 90 minutes when a cross to the back post found McLellan unmarked, but he directed his header over from 6 yards to the relief of the travelling supporters.