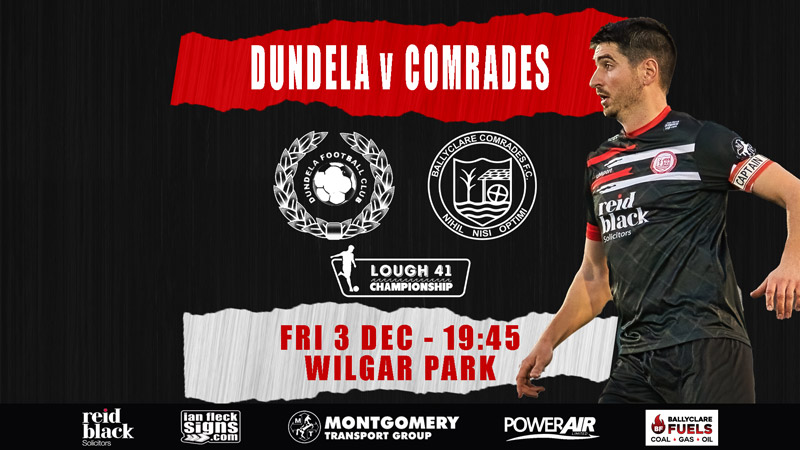 Dundela currently occupy 11th spot in the Lough 41 Championship. Last week, they battled to an equal share of the goals against Newry City in difficult conditions at a blustery Wilgar Park. James Teelan opened the scoring for Newry after eight minutes. He got on the end of a touch forward to flick the ball past Kyle Owens and beat Marc Matthews with a near post right foot finish. The Duns levelled almost immediately, however, through Guillaume Keke with a half volley from point blank range after a Tony Kane free-kick from wide on the right had been knocked on inside the box. And the frantic start continued with a quarter-of-an-hour on the clock when Johnny Taylor fired the home side into the lead from another Kane set piece, a corner on this occasion, after the ball fell loose from Jay Magee’s initial header had been well kept out by Steven Maguire. That was how it stayed until four minutes from the hour when Darren King levelled for Newry to ultimately secure a share of the spoils.

Last week, the Comrades staged a late comeback to recover a two-goal deficit and salvage a point from HW Welders at Blanchflower Park. The Welders moved in front on 38 minutes through Alan McMurtry who smashed the ball home from eight yards after receiving a low cross from the left. Josh Boyd doubled the home advantage on 67 minutes with a back post finish when the ball was played across the box into his path. But Ballyclare pulled a goal back just five minutes after that through Liam Hassin with a 25-yard effort into the top corner after a set piece was only partially cleared. And the Comrades secured a point with four minutes left on the clock when Matthew Herron found the net from Tom Mathieson’s cross. The draw keeps the Comrades in 7th spot in the Lough 41 Championship on 27 points.

The last time these two sides met at the beginning of October, Ballyclare Comrades defeated Dundela by a single first half goal at Dixon Park. The Comrades crafted the first chance of the night after nine minutes when Chris Ramsey sent a header from a Liam McKenna corner onto the crossbar before the ball fell to safety. What proved to be the winner came with just over a quarter-of-an-hour on the clock after a mix-up in the Dundela defence allowed Andy Mooney to set up McKenna to score from a tap in. The rest of the game was an entertaining, end to end encounter but Ballyclare held on to secure all three points although keeper Richard Purcell had to be alert in the closing minutes to thwart a header from Guillaume Keke as the visitors searched for an equaliser. 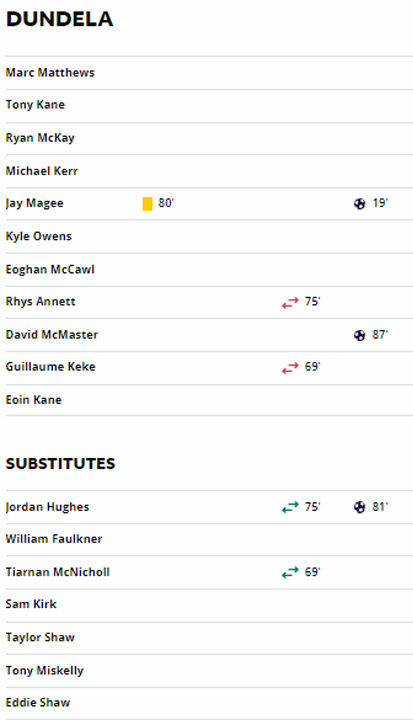 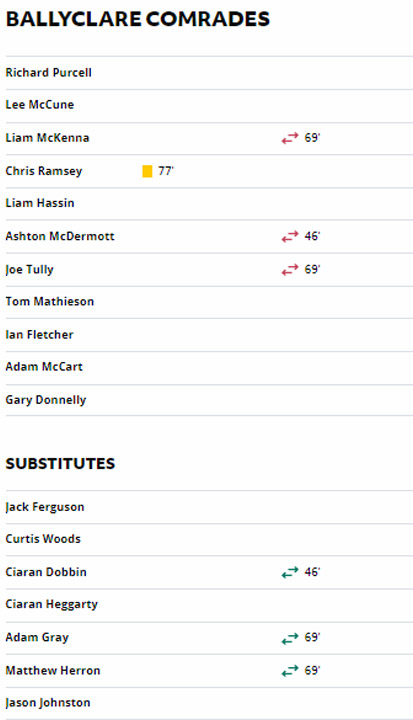 Comrades slumped to defeat at Dundela as their winless league run continued.

The visitors started brightly enough and had a good deal of the possession in the first quarter of an hour without unduly troubling the Dundela ‘keeper.

The hosts had the first real chance of the game in the 18th minute when Eoin Kane got onto the end of a high ball and broke into the box, but Richard Purcell was quickly out of his goal to block.

A minute later Dundela opened the scoring. Magee attacked a corner 6 yards out and powered a header into the net, giving Purcell no chance.

Comrades had a half chance in the 21st minute when Liam Hassin mad space to get in a shot from the right side of the box however Matthews was able to make a comfortable save. Then on 26 minutes Liam McKenna teed up Joe Tully to strike a fierce shot from 15 yards which Matthews did well to turn over the bar.

However, the visitors struggled to create anything in the latter part of the half and went in at the break needing an improvement after the break.

The early signs after the restart were encouraging for the away side as they upped their tempo. On 54 minutes Joe Tully deflected a header just over the bar. Then three minutes later Liam McKenna struck a volley from 10 yards after getting on the end of a Ciarán Dobbin cross, but his effort flew over the bar.

In the 60th minute the hosts threatened when Keke was played in on the right side of the box and fired a shot just wide of the far post from 11 yards. Then in the 66th minute a high ball caused mayhem in the 6-yard box and the travelling supporters were relived to see Richard Purcell eventually able to dive on the ball to end the danger.

Comrades had increasingly looked unlikely to get on the scoresheet, but in the 81st minute they were presented with a great opportunity to get back on level terms when Tom Mathieson was brought down in the box by Owens and a penalty awarded. Chris Ramsey stepped up to take the spot-kick, but his effort was saved by Matthews, who was there again to deny Ian Fletcher after the ball had looped up to him from the original save and he headed it back on target.

Comrades’ disappointment was compounded straight away when Dundela broke up field and double their lead with McMaster sending in a cross to the back post which was headed in from 4 yards by Hughes.

In the 88th minute the result was put beyond doubt when the hosts broke forward with purpose and McMaster ran forward from halfway before striking a fine finish from the edge of the box.