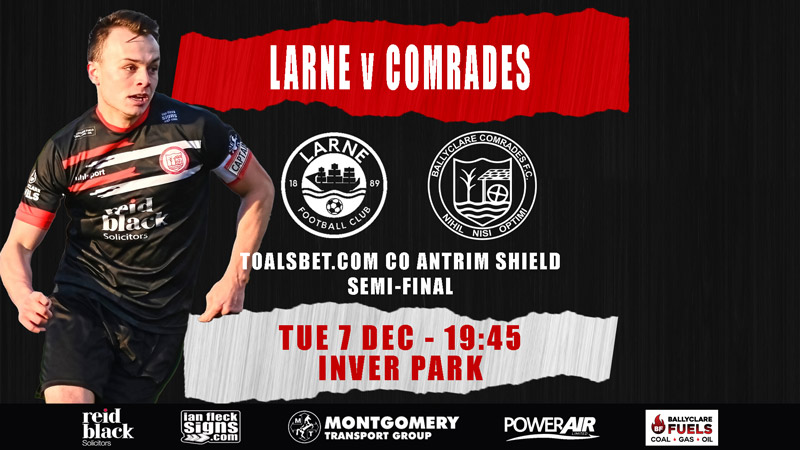 We travel to Inver Park Park tomorrow evening to take on Larne in the ToalsBet.com Co Antrim Shield Semi-Final.

Entry: TICKET ONLY. No cash gate will be available. Comrades fans will be in the McKay Stand at Inver Park, and tickets priced at £10 adult and £6 concession are available at the link below:

Larne are currently sitting 4th in the Danske Bank Premiership, just 4 points off top spot. Last week, Three second half goals helped Larne eventually get past Warrenpoint Town at Inver Park. The game got off to a bright start with chances at both ends inside the opening couple of minutes. Ben Doherty fired just over from a David McDaid cut back for Larne while, for ‘Point, Kealan Dillon sent the ball a little too high. That trend continued with Alan O’Sullivan being denied by Michael Argyrides with Ronan Hale then seeing an effort blocked soon after. Then, midway through the first half, Conor Mitchell made a point blank save from Doherty before ‘Point responded with a Thomas Maguire deflected shot dropping narrowly off target. Larne moved in front on 48 minutes courtesy of Albert Watson’s back post header after he broke free to connect with Doherty’s corner from the right. McDaid then made it 2-0 six minutes after that after running onto a Mark Randall through ball to keep his composure to slot past Mitchell. And Larne’s third arrived with 20 minutes remaining after Hale combined with Tomas Cosgrove to fire into the bottom corner.

Friday night saw Dundela sweep to a three-goal victory over the Comrades at Wilgar Park. The visitors started on the front foot, enjoying plenty of possession during the opening exchanges but they fell behind on 19 minutes when Jay Magee found the net with a header from a corner. Ballyclare attempted to work their way back into the game with Liam Hassin and Joe Tully both testing Marc Matthews but the home keeper proved equal to every challenge thrown at him. Still trailing, Ballyclare upped the tempo after the break and came close early on when Tully saw a header deflected over the bar. Liam McKenna then connected with a Ciaran Dobbin cross but, again, this went over as did another Tully effort on the hour. Then, with ten minutes remaining, Ballyclare were awarded a spot-kick but it was an evening when Matthews was proving unbeatable as he made the save from Chris Ramsey. That proved to be a decisive moment when the Duns immediately broke down the other end and doubled their advantage through Jordan Hughes before, with three minutes remaining, David McMaster made sure by turning home number three for Niall Currie’s side. The result keeps the Comrades in 7th spot in the Lough 41 Championship.

The last time these two sides met was in October 2020 in the first round of this very same competition. Albert Watson opened the scoring at Inver Park in the 20th minute after Jack Ferguson had saved the initial header from a Larne corner, Watson followed in with the rebound. Dean Jarvis doubled Larne’s lead in the 72nd minute when a heavily deflected free-kick left ‘keeper Ferguson no chance. That was how it stayed as Larne ran out 2-0 winners and progressed to the next round.

The excitement of Comrades’ big County Antrim Shield semi-final game at Inver Park turned into a nightmare as they were thrashed by the impressive full-time professionals of Larne.

Right from the kick-off the hosts attacked with venom. Inside the third minute they tested Richard Purcell who did well to parry a 16 yard shot from Hale wide of the target.

Two minutes later Larne grabbed an early lead when Balmer got his head to the ball from a corner and sent an effort on target, which Purcell gathered but the ball was adjudged to be over the line.

It was mostly one-way traffic towards the Comrades goal and in the 11th minute Richard Purcell was again called into action to save a powerful Bolger head from a corner.

It wasn’t long however before the home side doubled their lead when on 13 minutes they punished a Comrades mistake in the middle of the park, with the ball being played into the box by Nasseri for Randall to turn home from 6 yards.

Comrades tried to respond with occasional sorties forward, with the most dangerous of these being in the 29th minute when a good ball played by Liam Hassin looked to have set Adam Gray free, but defender Cosgrove did enough to put him off when he shot and the effort went wide from 10 yards. Then on 41 minutes Ciaran Heggarty made space for a shot from the edge of the box, but it didn’t have the power to trouble the ‘keeper.

Just as it looked as if Comrades may be able to avoid further damage before the break, another mistake cost them dearly. In the 42nd minute a poor ball out from the back was intercepted by Larne who again made it count when the ball was played wide to Cosgrove who then delivered a perfect cross for Hale to head into the net from 5 yards.

The second half saw Larne even more dominant, with their constant movement and extra fitness bamboozling a tiring Comrades team. It was no surprise the fourth goal arrived when in the 58th minute a ball was played into the box where Hale neatly chested it down to volley home from 8 yards.

A dazzling period of passing from the hosts led to the fifth goal on 66 minutes with Lusty scoring with a header 6 yards from a Doherty cross to the back post.

Larne continued to regularly make chances with the visitors chasing shadows. In the 70th minute they came close when Doherty guided an effort just wide from the edge of the box.

Nasseri got reward for a superb performance with a goal to make it 6-0 on 77 minutes when he skipped past two challenges just outside the box before hitting a well-struck shot into the bottom corner of the net, giving Purcell no chance.

Larne looked able to score at will in the closing stages of the match. In the 80th minute it was seven when a ball pulled back from the by-line by Jarvis found Curran who finished confidently from 10 yards.

Comrades’ miserable night was completed when they conceded yet another goal on 83 minutes when Curran was again on the end of a low ball into the box and made no mistake with a cool finish.