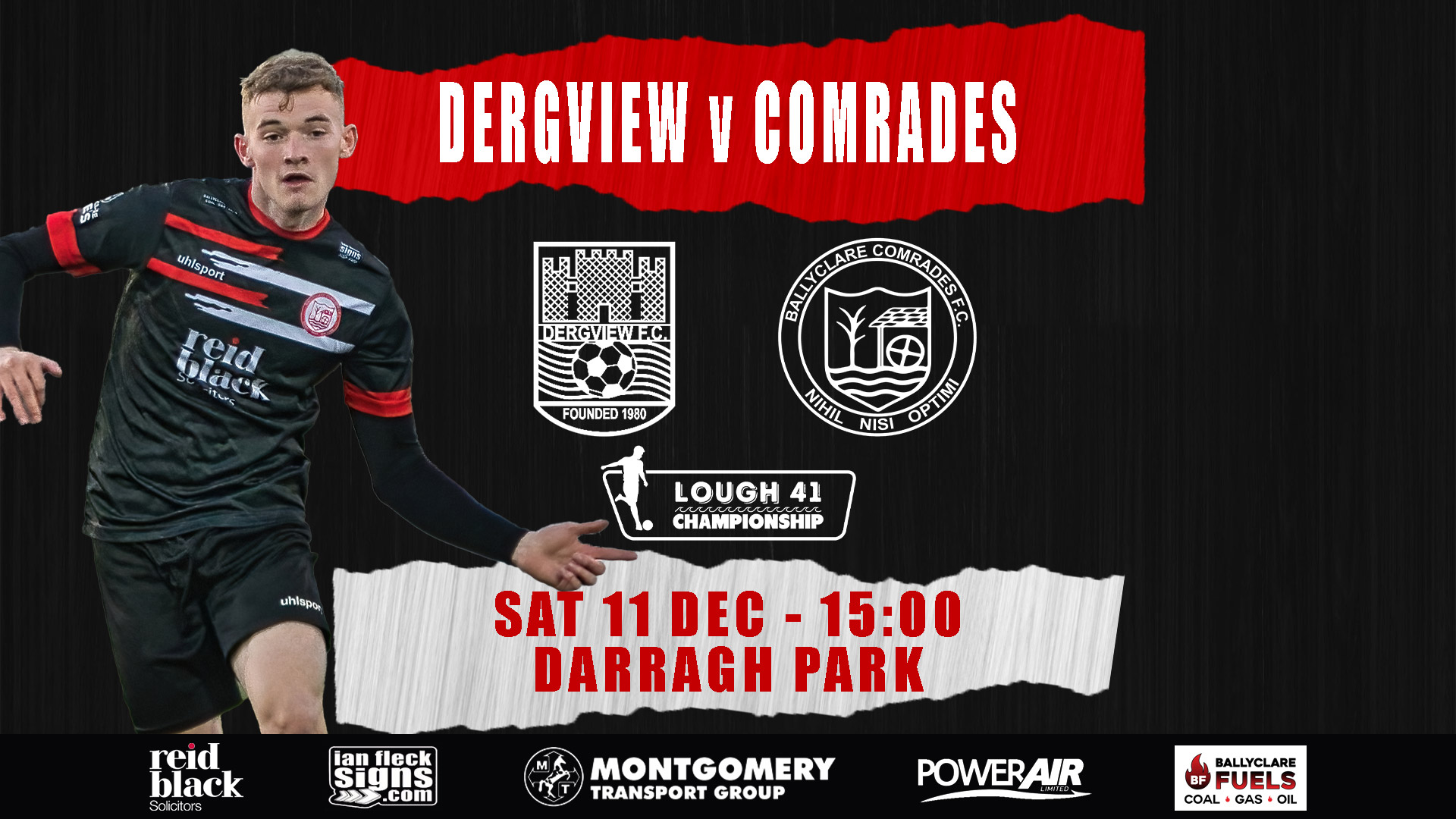 It’s back to league action as we travel to Darragh Park tomorrow afternoon to take on Dergview in our next Lough 41 Championship fixture.

Dergview currently occupy 9th spot in the Lough 41 Championship. A win tomorrow would see them leapfrog the Comrades who are just 2 points ahead in 7th. Last week, a Darren Murray second half hat-trick saw HW Welders defeat Dergview 3-1 at Blanchflower Park. Scoreless at the break, Murray fired the Welders in front just short of the hour mark with a great finish. Jamie Browne levelled for Dergview on 69 minutes with a chipped finish past Ben McCauley into the corner of the net. The Welders were reduced to ten men on 78 minutes after Michael McLellan picked up his second booking in the space of few minutes for unsporting behaviour. However, the home side responded positively and duly moved back into the lead with a couple of minutes remaining with Murray’s second of the afternoon … and the same player followed that up with his hat-trick goal deep into stoppage time.

It’s been a rough patch for the Comrades of late. Without a win in their last 7 league outings, things didn’t get much easier as they suffered a heavy 8-0 defeat to East Antrim rivals, Larne, during the week in the Semi Final of the ToalsBet.com Co Antrim Shield. It was always going to be a tough task against the full-time Danske Bank Premiership side, but a goal inside the first 5 minutes, followed by two individual errors sent the Comrades in at half-time 3-0 down. The second half saw Larne even more dominant, with their constant movement and extra fitness bamboozling a tiring Comrades team and the Larne men went on to score 5 more to see out a thumping victory. Despite a difficult night and difficult patch, Paul Harbinson spoke after the game about how it’s time to “lift ourselves, take the shackles off, stop with all of the pressure talk, just focus on our jobs and get back to this group of players who want to play for each other. Even after (the Larne match), the players grouped together, they’re in it together and we’re fighting for each other”.

The last time these two sides met in October, an Andrew Mooney double helped Ballyclare Comrades defeat Dergview at Darragh Park. Scoreless at the break, both goals came midway through the second half. The 24-year-old opened the scoring on 63 minutes with a back post header six yards out after Tom Mathieson had knocked the ball over following a mazy run. And Mooney doubled his tally just five minutes later when, following a botched attempt at a clearance, he dispossessed a defender to tuck the ball past keeper Alan Buchanan. Benny Igiehon pulled one back for Dergview with ten minutes remaining but it wasn’t enough to spark a late comeback. 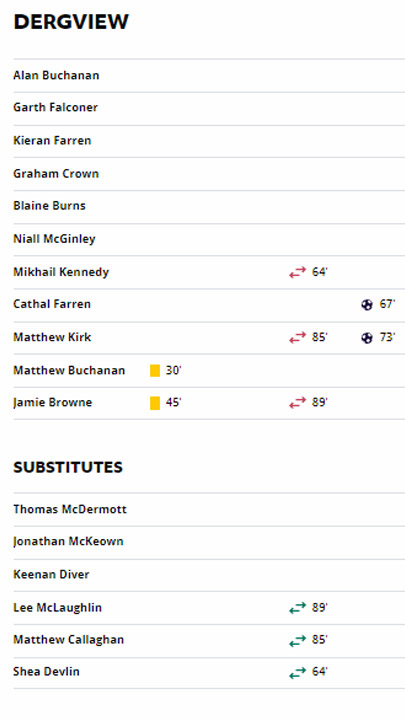 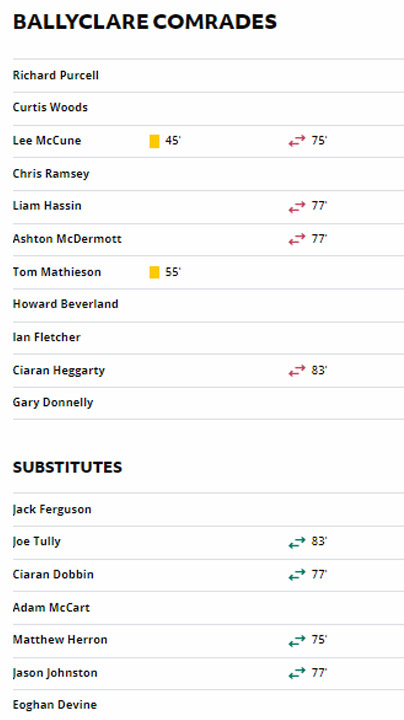 Comrades’ winless run in the Championship stretched to eight games with a defeat at Dergview.

The visitors started well and were on the front foot for much of the first half. In the 7th minute they had a good chance when a ball played into the box by Ciaran Heggarty broke to Ian Fletcher who stabbed the ball towards goal from 7 yards, but his effort was deflected wide by a defender. From the resulting corner, played in by Fletcher, Heggarty had a chance with a header from 6 yards, but his attempt went over the bar.

Comrades continued to press forward and in the 14th minute they had a half chance when after a swift break forward Ciaran Heggarty laid the ball of to the arriving Gary Donnelly who struck and effort wide from 22 yards.

On 24 minutes the men in red had another chance when Heggarty got his head to a Lee McCune cross, but the ball went straight at the ‘keeper who made a comfortable save.

At the other end, the hosts rarely troubled the Comrades defence in the first half. Although the visitors’ own attacking threat did itself rather dissipate in the latter stages of the half against a resolute Dergview defence.

Nevertheless, Comrades will have been disappointed not to have gone into the break with a lead. However, they started the second half promisingly. On 48 minutes Ciaran Heggarty forced the ‘keeper to tip the ball over from a well struck 20-yard effort. From the corner Heggarty then got in front of his marker to send in a stooping header from 6 yards, but his effort was off target.

This early flurry in the first half for the visitors was to be deceptive as Dergview soon began to look the more dangerous side. In the 56th minute they threated when Richard Purcell was forced to turn the ball wide from a curling shot struck by Cathan Farren from 22 yards.

The pivotal moment of the came in the 68th minute when Ashton McDermott was adjudged to have fouled an opponent inside the box. Cathal Farren stepped up to convert the penalty.

The host were now very much in the ascendancy and five minutes later doubled their lead when a good move ended with Kirk producing a neat finish wide of Purcell from the 11 yards out.

Comrades could produce nothing to look like getting back into the game and the hosts held onto their lead comfortably until the final whistle.