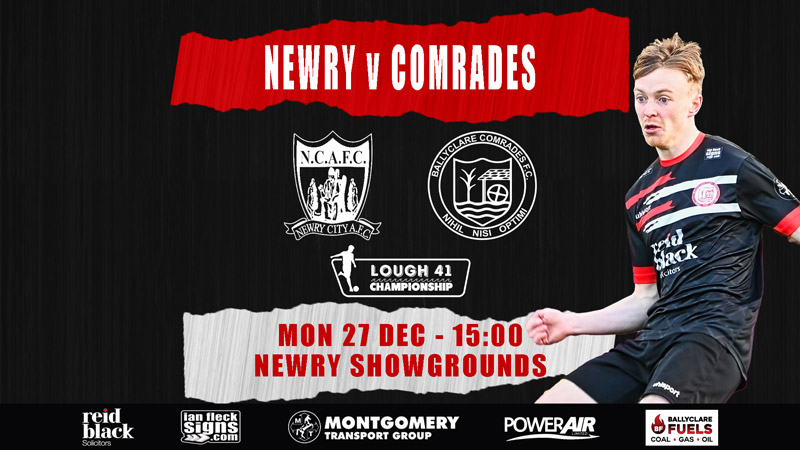 We travel to Newry Showgrounds tomorrow afternoon to take on Newry City in our next Lough 41 Championship fixture.

Newry are flying high at the moment and currently occupy top spot in the Lough 41 Championship table. Last week, a Daniel Hughes goal proved enough for leaders Newry City to defeat bottom of the table Queen’s University at The Dub. Hughes squeezed the ball past keeper Conan Doherty at the right post to maintain an eight point lead at the top for Darren Mullen’s side after they had been held by the Students for almost an hour.

Last week, Ards proved too strong for the Comrades as they swept to a 4-2 victory at Dixon Park. Ards might have moved in front as early as the opening minute when presented with a penalty but Kyle Calderwood’s spot-kick was saved by Jack Ferguson. The deadlock was broken on ten minutes, however, when Ciaran Heggarty nodded Ballyclare in front from Ian Fletcher’s free-kick. However, two goals in quick succession midway through the first half tipped the balance in Ards’ favour. Conall McGrandles levelled on 21 minutes with a header from Patrick Cafolla’s corner before, four minutes after that, Ross Arthurs made it 2-1 with a finish in off an upright. Ards further extended their advantage just before the hour when Cafolla found the net but Ballyclare came back into proceedings on 73 minutes through Chris Ramsey’s header from Ashton McDermott’s cross. But Salou Jallow made sure of the points for Ards deep into stoppage time after rounding Ferguson to calmly slot home. The result saw the Comrades drop to 8th position in the Lough 41 Championship table. Speaking on tomorrow’s upcoming fixture, Paul Harbinson explained how the Comrades must “try so hard to put away the narrative of where we are and just focus on the game to see what we can get from it.”

The last time these two sides met was back in September when the Comrades secured a narrow 1-0 victory over table-toppers Newry at Dixon Park. Scoreless at the break, the only goal of the game came seven minutes into the second half through Gary Donnelly who finished on the half volley from six yards out after Tom Mathieson had teed the ball up. 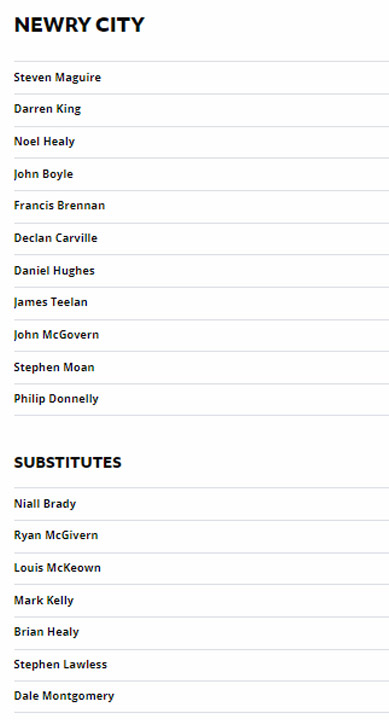 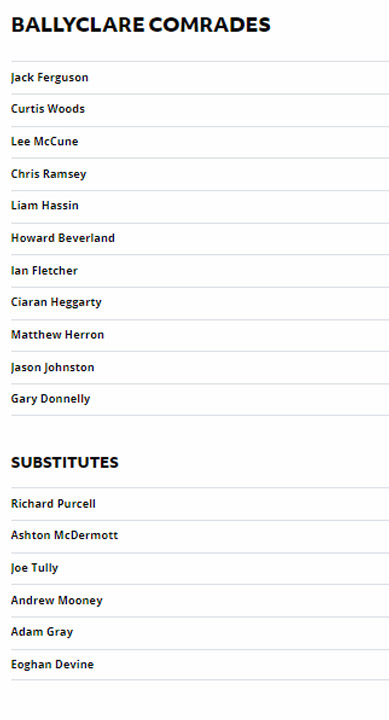 Comrades put an end to their long run without a league win with a surprise victory at leaders Newry City on a foggy day in the border town.

After an even opening period when Comrades were able to get forward on a number of occasions, the hosts began to dominate possession, although they were largely frustrated in the first half by some resolute defending from the visitors.

The first effort of note in the game came in the 18th minute when Carville got space to fire in a shot from just outside the box which went over the bar.

Comrades were struggling to get support up to the industrious Ciaran Heggarty. One time when they did get men forward on 32 minutes they were almost punished when a ball out from the back was telegraphed and intercepted by Hughes who raced forward into the box and shot from 11 yards only to be denied by a fine save from Jack Ferguson, with the loose ball then being struck into the side-netting by McGovern.

In the 37th minute the visitors stunned the large holiday home crowd with a superb goal to take the lead. Lee McCune surged forward from left-back and then played a ball across which deflected into the path of Ciaran Heggarty. The young striker had his back to goal 25 yards out but produced a wonderful turn and shot which saw the ball dip over the outstretched hand of the ‘keeper and under the bar.

This was enough to send Comrades in with a lead at the interval, but a second half onslaught was expected from Newry.

Jack Ferguson was called into action inside two minutes of the restart when he made a comfortable save from a scuffed Hughes shot struck from a good position 12 yards out.

Despite Newry doing most of the attacking Comrades didn’t just sit on their lead and looked to pose a threat themselves. On 51 minutes good pressing forced the hosts to concede the ball deep in their own half and it was played to Gary Donnelly who shot just over the bar from 30 yards.

With visibility continuing to be an issue due to the lingering fog Newry began to try to turn up the pressure. On 59 minutes Jack Ferguson had to make a good save to turn away a shot from Teelan which flew through a crowded box. Then four minutes later the home side spurned a good chance when the ball fell to McGovern after it was played into the box, but he shot wide from 8 yards.

Comrades were defending well all over the pitch and proving hard to break down, whilst they tried to make the most of any possession they had when going forward.

On 66 minutes the tireless Ciaran Heggarty won the ball in Newry territory and played it to Matthew Herron, allowing him to run into the box and strike shot, but Maguire saved comfortably. Then five minutes later Herron had another chance when a dangerous ball played into the box found its way to him, but his powerful effort from a similar distance this time went into the side-netting.

The latter stages of the match saw Comrades defending for their lives with everyone contributing to a gritty hard-working performance which frustrated the hosts. However, there was a major scare to get past in the 79th minute when a free kick curled wide of the wall from 25 yards by McGovern forced Jack Ferguson to make a great save, turning the ball wide of the base of the post.

Then in the 86th minute the home crowd screamed for a penalty after Teelan went over the legs of Curtis Woods inside the box, but the referee was not convinced.

The visitors held out gallantly in the final minutes to secure a morale-boosting win and send the travelling supporters home happy.