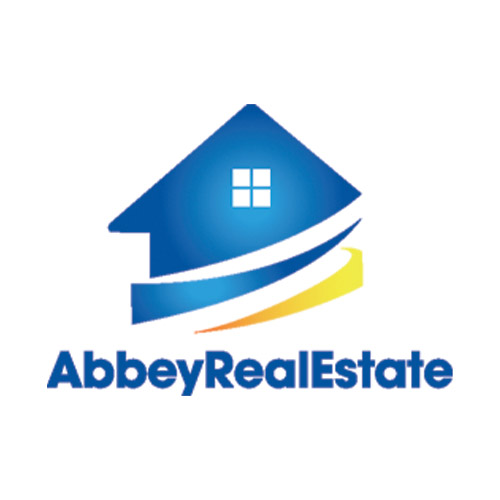 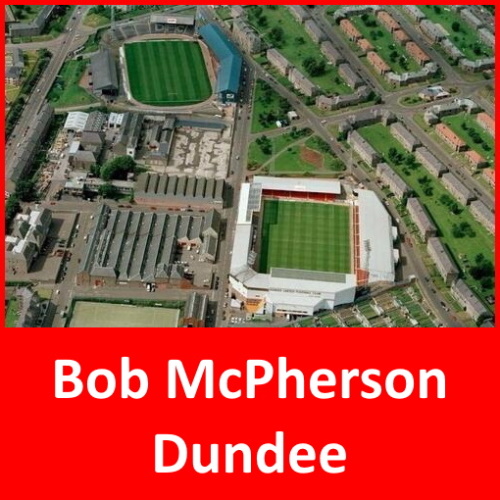 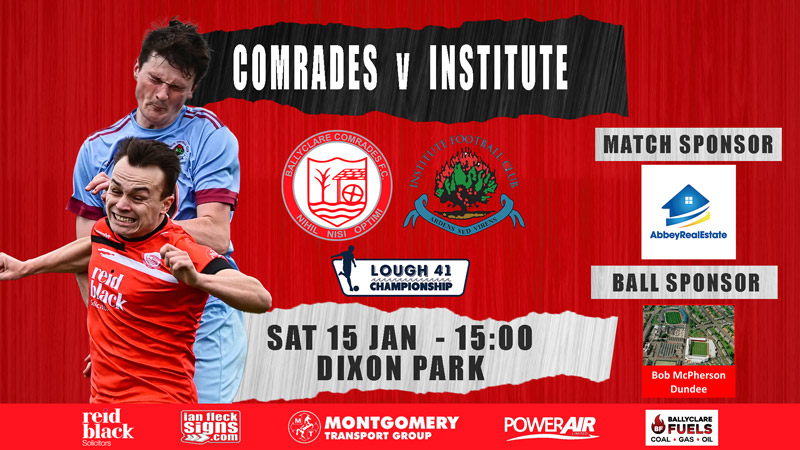 Institute suffered similar fate to the Comrades last week as they exited the Irish Cup at the hands of Portstewart FC. With the game looking to be heading for extra time, Portstewart’s Mark Edgar struck home an effort from 30 yards into the top corner, leaving keeper, Connolly, helpless. In the league, ‘Stute currently occupy the second from bottom spot, but they did hold league leaders, Newry City to a 0-0 in their last league outing.

The Comrades exited the Irish Cup at the first hurdle last week with a defeat to local rivals Carrick Rangers where the Premiership side were just too strong on the day. The visitors made the breakthrough on the half-hour mark when a lovely ball from Cherry set Gibson free on the left side of the box and he made no mistake clinically finishing wide of the ‘keeper from 6 yards. Eight minutes later Carrick doubled their lead with a great goal. Cherry picked up a clearance from the Comrades defence and struck a superb shot from 30 yards which came off the inside of the post and into the net, giving Richard Purcell no chance. The game rather petered out in its latter stages with the visitors maintaining their lead comfortably and Comrades, although they had steadied the ship defensively, struggling to create much of a threat. Paul Harbinson believes his side can take the positives from last week’s game into tomorrow’s upcoming fixture; “There’s fight, there’s heart and there’s honesty in the changing room. There’s a team that wants to work for each other, we’re still making silly mistakes, but there’s lots to build on and we’ve a couple of new faces coming in as well.”

The Comrades and Institute drew a blank last time out at Dixon Park in October, although the visitors might feel they should have returned home with the points in the bag after missing a second half spot-kick. The Comrades started brightly, creating an early opening which ended with Liam McKenna dragging an effort wide when through on goal. ‘Stute came close midway through the first half when Aaron McGurk saw a 25-yard free-kick tipped over by Richard Purcell before, a minute after that, he kept out a Jamie Dunne strike. At the other end John Connolly did well to deal with another McKenna effort and was called into action again not long after that to save a Gary Donnelly header. The visitors had a great chance to move in front just before the hour. Curtis Woods was adjudged to have upended Dunne inside the box but, from the penalty that followed, Liam Walsh could only look on as his effort was turned away by the diving Purcell. Ballyclare were reduced to ten men on 74 minutes when Howard Beverland was dismissed for a challenge on Liam Walsh but ‘Stute failed to take advantage and, indeed, have Connolly to thank with a couple of saves late in the game to deny McKenna and Ciaran Dobbin. 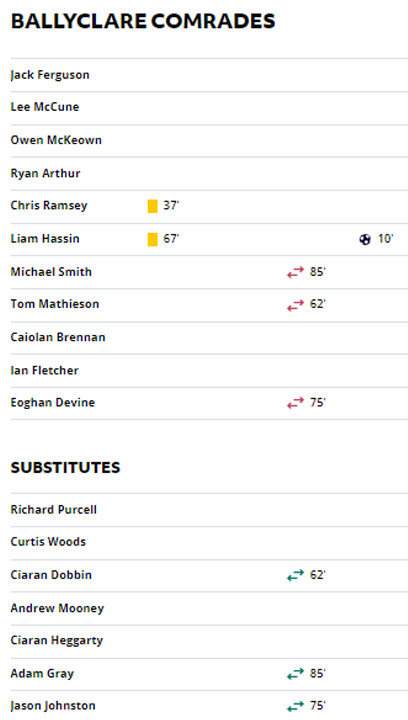 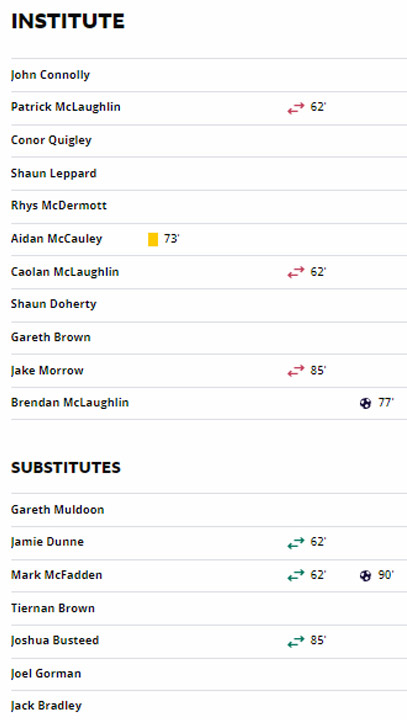 Despite an encouraging first half display Comrades fell to defeat with the last kick of the game at home to Institute.

With four January transfer window signings on the pitch the hosts started strongly with a flurry of corners as they pressed Institute back. They got their reward in the 10th minute with the opening goal. Ian Fletcher drove forward on the right and delivered a high ball into the box which broke off a defender’s head towards Liam Hassin who looped a header on target which the ‘keeper got his fingertip to but couldn’t prevent dropping into the net.

Comrades continued to boss the opening 25 minutes with lively attacking play. However, the latter stages of the half saw the visitors begin to get into the game. Despite this the hosts still looked the more dangerous side. In the 31st minute the tenacious Tom Mathieson stole the ball just inside the Comrades half and played a great ball forward to set Caoilan Brennan free to run cut in from the left towards the edge of the box where he struck a firm shot which forced Connolly to save at the near post.

Three minutes later Mathieson again won the ball, this time in the Institute half, and it was worked across to Brennan on the left who then played a dangerous ball across the box which broke to Michael Smith, but his rising shot from 8 yards went over the bar.

The first effort of note from the visitors came on 42 minutes when a swift break forward ended with Brendan McLaughlin firing in a shot from 20 yards, but Jack Ferguson was able to gather.

The early stages of the second half were evenly balanced with neither side able to fashion a decent chance. However, things began to open up around the midway point of the half.

In the 65th minute the hosts had a chance when a Caoilan Brennan corner was met by a Ryan Arthur header from 6 yards which went wide of the target. Then a minute later at the other end the ball was given away cheaply allowing Brendan McLaughlin to break into the box and strike from 16 yards, forcing Jack Ferguson to save at the near post.

The visitors had another chance in the 68th minute when a free kick played into the box saw Leppard head on target from 7 yards, but Ferguson was again well placed to make the save.

On 71 minutes Liam Hassin had a chance for Comrades when he arrived to glance a header wide from 9 yards after getting on the end of a ball played into the box by Ian Fletcher.

Play continued to flow from end to end and it was Institute who had a chance on 77 minutes when a ball played into the box broke to Dunne who dragged a shot wide of the near post from 10 yards out.

A minute later however Institute were back on level terms when a looping Brendan McLaughlin header drifted into the top corner of the net.

Comrades threatened to retake the lead in the 80th minute when the ball was only cleared out of the Institute box to Jason Johnston who thundered a half-volley from 20 yards which looked on target before being blocked by a defender.

Both sides now went for a winner, but it looked as if the game was heading for a draw until with the last kick of the game three minutes into injury-time McFadden tricked his way into a shooting position on the left side of the box and struck a perfect finish wide of the ‘keeper and inside the post to steal victory for the men from the North-West. 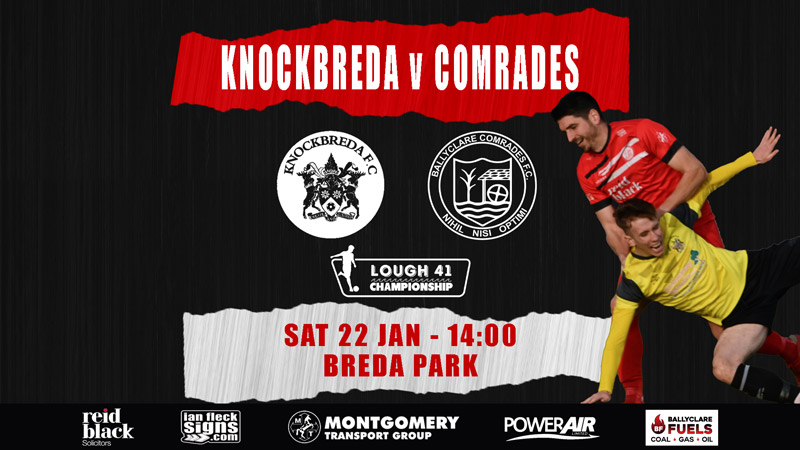 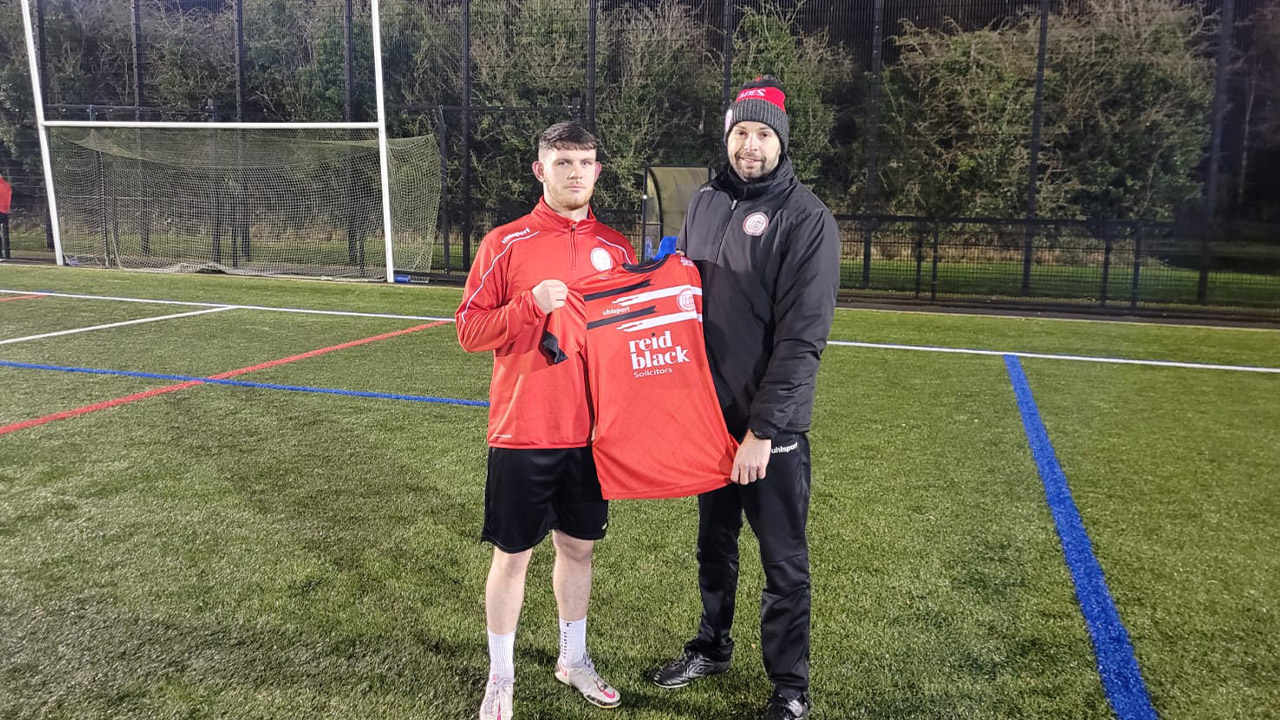