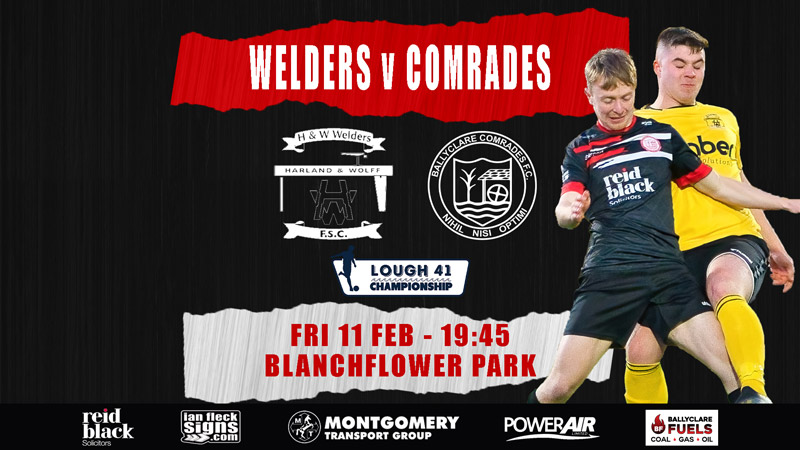 We travel to Blanchflower Park tomorrow evening to take on Harland & Wolff Welders in our next Lough 41 Championship fixture.

The Welders currently occupy 5th position in the Lough 41 Championship, just 1 point from second spot. Last week, HW Welders came from behind to defeat Knockbreda at Breda Park. Former Comrades forward, Ciaran Heggarty, fired the home side in front with just under a quarter-of-an-hour on the clock with a half volley from just inside the area after the Welders defence failed to clear a corner. However, the visitors levelled not long after that when Jake Corbett swivelled and turned outside the box to send a great effort into the roof of the net. Then, just before the break, Michael McLellan knocked home what proved to be the winner with a low driven free-kick into the bottom corner of the net.

With no game last week, the Comrades remain in 8th position in the Lough 41 Championship on 32 points. Our last game saw us share the spoils with Ballinamallard United at Dixon Park in a game which saw the lead change twice. After a number of half chances at either end it fell to the home side to move in front on 37 minutes when Jason Johnston headed home after Kyle Beggs had delivered the ball into the box. It was an advantage the Comrades held until a couple of minutes into the second half when Callum Moorehead nodded past Richard Purcell to level matters. Then, on 64 minutes, Sean McEvoy edged the visitors into the lead with a well executed free-kick from around 30 yards low into the bottom corner. However, it again proved to be a short lived period on top after Andrew Mooney equalised for the Comrades with a left-foot strike from just inside the box after Caiolan Brennan had slipped him through on the left.

The last time these two sides met, The Comrades staged a late comeback to recover a two-goal deficit and salvage a point from HW Welders at Blanchflower Park. The Welders moved in front on 38 minutes through Alan McMurtry who smashed the ball home from eight yards after receiving a low cross from the left. Josh Boyd doubled the home advantage on 67 minutes with a back post finish when the ball was played across the box into his path. But Ballyclare pulled a goal back just five minutes after that through Liam Hassin with a 25-yard effort into the top corner after a set piece was only partially cleared. And the Comrades secured a point with four minutes left on the clock when Matthew Herron found the net from Tom Mathieson’s cross. 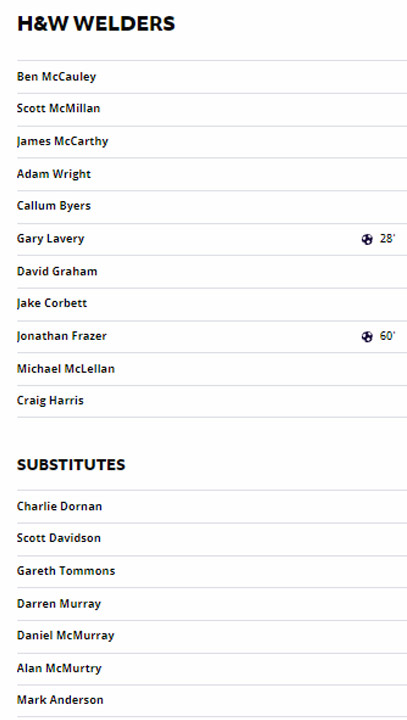 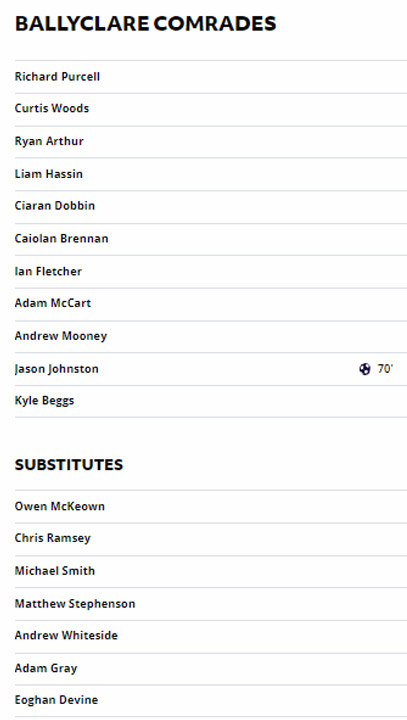 Comrades’ poor run of form continued with defeat against the Welders under the lights at Blanchflower Stadium.

The visitors started encouragingly and dominated the first quarter of the game, pinning the hosts back for lengthy periods.

In the 8th minute an excellent quick passing move set up the chance for Caoilan Brennan to dart into the box and fire a good effort on target from an angle 15 yards out, but ‘keeper McCauley was able to parry the ball out. Then, three minutes later, Ciarán Dobbin did very well to trick his way past a defender on the by-line and play a dangerous ball across the 6-yard box, but there was no-one there to finish.

Comrades hadn’t been able to convert their dominance into goals and were made to pay in the 28th minute when the Welders scored with their first attempt on goal, when Lavery received the ball 22 yards out and struck a low shot which crept past the despairing dive of Richard Purcell and inside the post.

This first goal changed the momentum of the game, with attacking possession now much more evenly balanced than previously, but there were no chances of note for either side in the rest of the first half.

The second half started with the hosts looking the more threatening side and Comrades’ play now rather disjointed and lacking in confidence. On the hour Welders doubled their lead when the ball was played into the box finding Frazer whose first-time shot from 12 yards fizzed past Purcell, giving the ‘keeper no chance.

The visitors’ attempts to get back into the game were less than convincing until they pulled a goal back on 71 minutes. Throughout the game they had won a considerable number of corners but had failed to make the most of any of them, until Caoilan Brennan played the ball to the far post where Jason Johnston was there to head firmly into the net from 4 yards.

Comrades now saw a glimmer of hope of getting something from the match, but despite pressing forward frequently they failed to trouble the Welders ‘keeper, in fact the chances in the remainder of the game fell to the home side.

In the 77th minute a throw-in into the box saw the ball flicked on to McLellan who headed on target from 5 yards forcing Richard Purcell to save at his near post. Then, a minute into injury-time a breakaway left the Comraded defence floundering and McLellan broke through to run in on goal, but his effort was diverted onto the post of Purcell’s leg and when the loose ball was played back into the Welders striker, he shot wide from 8 yards.