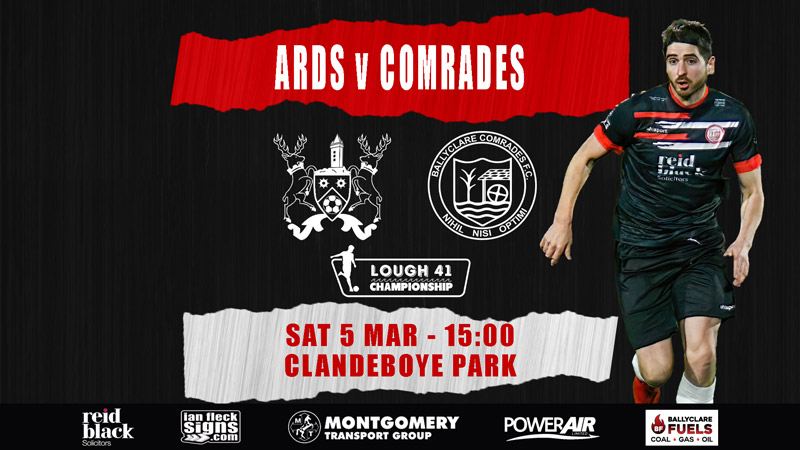 We travel to Clandeboye Park tomorrow afternoon to take on Ards in our next Lough 41 Championship fixture.

Last week Ards and Dergview carved out a 2-2 draw at Darragh Park just a week after the venue was left underwater because of the recent storms. Matthew Kirk fired Dergview in front on 18 minutes with a successfully converted spot-kick but Ards hit back through Christopher Crane’s 30-yard effort into the top corner to level after half-an-hour. That was how it stayed until the 59th minute when Niall Fielding restored Dergview’s advantage with another long range strike but, as before, the visitors levelled soon after when Ross Arthurs turned home a header. The draw keeps Ards in 6th position, just a point ahead of Dergview who have a game in hand.

Ballyclare Comrades and Queen’s University battled to a 1-1 draw at Dixon Park with both goals coming in the first half. The home side came close to breaking the deadlock early on when an Ian Fletcher free-kick was headed against the crossbar by a visiting defender before, from the follow up, Michael Smith also directed his header against the woodwork. But Ballyclare did find a way through on 14 minutes courtesy of Kyle Beggs’ cross-come-shot which bypassed everyone to end up in the net. However the Students levelled just before the half-hour mark through Leon Bonnes after he got his head to a corner while, on the stroke of half-time, Fletcher was on hand to clear the ball off the line. The second half was a much less lively affair with neither side able to settle nor grab what could well have been the winner. The draw proved to be the last game in charge for Paul Harbinson, after a run of bad form over the last lot of months lead to the Comrades dropping to 9th position in the table. Club Captain, Chris Ramsey, will be in charge of all first team affairs on a caretaker basis while the Board of Directors carries out a recruitment process for a new Manager. Chris will be assisted by Adam McCart, Rob Murdie and Michael Higgins.

The last time these two sides met, Ards swept to a 4-2 victory over Ballyclare Comrades at Dixon Park in December. Ards might have moved in front as early as the opening minute when presented with a penalty but Kyle Calderwood’s spot-kick was saved by Jack Ferguson. The deadlock was broken on ten minutes, however, when Ciaran Heggarty nodded Ballyclare in front from Ian Fletcher’s free-kick. However, two goals in quick succession midway through the first half tipped the balance in Ards’ favour. Conall McGrandles levelled on 21 minutes with a header from Patrick Cafolla’s corner before, four minutes after that, Ross Arthurs made it 2-1 with a finish in off an upright. Ards further extended their advantage just before the hour when Cafolla found the net but Ballyclare came back into proceedings on 73 minutes through Chris Ramsey’s header from Ashton McDermott’s cross. But Salou Jallow made sure of the points for Ards deep into stoppage time after rounding Ferguson to calmly slot home.

Comrades’ terrible run of league form, which cost Paul Harbinson his job as manager during the week, continued as, with club captain Paul Ramsey taking control of the team on an interim basis, they slumped to a comprehensive defeat away to Ards.

The team lined up at the start of the game in a new formation with three at the back and, as has often been the case in recent weeks, they started brightly.

In the 6th minute they really should have taken the lead when a ball was played through to Andrew Mooney sending him clear of the Ards defence, but his shot from 8 yards was diverted wide by a save from ‘keeper Neeson.

Uncertainty in the visitors defence was to be a feature of the match and it was first evident on 10 minutes when a high ball pumped forward into the box should have been dealt with, but a mix up between ‘keeper and defender allowed Arturs to get onto the ball inside the box and Jack Ferguson had to turn his resulting shot from 8 yards wide of the post with a save off his legs.

Again, has so often been the case recently, a mistake led too easily to a goal for the opposition, when in the 16th minute a poor kick out by Jack Ferguson gifted attacking possession to Ards, but even then it was far too simple for the ball to find its way to Arthurs who slotted it in from 9 yards with the visitors’ defence exposed.

Three minutes later Comrades, who were still at this stage looking threatening going forward, had a chance to equalise when an Owen McKeown cross from the right found the head of Andrew Mooney at the back post, but he headed over from 5 yards out.

Comrades’ cause was not helped by two enforced changes after the midway point in the first half with Adam McCart and Owen McKeown having to come off which necessitated changes in formation. They looked increasingly vulnerable at the back from that point on. In the 29th minute Ards threatened to double their lead when McAllister got in a well-struck shot from the left side of the box which Jack Ferguson had to turn wide of the target.

On 34 minutes the hosts did add to their advantage when a corner played to the back post broke to Reynolds who finished with a shot just inside the post from 4 yards. Despite Comrades’ claims for a handball before the ball reached the scorer, the goal stood.

A minute later the visitors, came close to getting a goal back when a good run forward by Caoilan Brennan ended with him feeding Andrew Mooney who then attempted a deft lob from 22 yards which sailed just over the bar.

The visitors still had some life in them and in the 42nd minute they had a chance when a long throw into the box from Matthew Stephenson saw the ball beak to Andrew Whiteside and his snap-shot from 10 yards tested ‘keeper Neeson who was well placed to save.

Comrades’ chances of getting back into the match were effectively snuffed out on 44 minutes when Ards grabbed a third goal. Once more it was all to easy for the opposition to score. The ball was played into McAllister inside the box, and he had far too much time and space to find the back of the net from 6 yards.

Things might have got even worse for Comrades before the break when a minute into first half injury-time Reynolds got in a shot from 15 yards, but Jack Ferguson was able to block the near post.

There was very little in the second half from the visitors to suggest a comeback was on the cards as Ards dominated. On the hour, the home side had a good chance to increase their lead when Igiehon headed over from 6 yards from a dangerous cross into the box. Then, three minute later, the same player saw his shot from 25 yards fizz just over the bar.

The closest the visitors came to pulling a goal back was on 75 minutes when the ball was headed out from in front of the goal from a corner but only went out to Ryan Arthur who headed it back towards goal from 12 yards. However, his effort was cleared off the line.

The latter staged of the game saw Ards cement their win with two further goals. On 79 minutes McAllister hit a firm shot from the left side of the box which took a deflection off a defender and the ball flew past the wrong-footed ‘keeper. Then, to round off Comrades’ misery, a fifth goal arrived on 85 minutes when a low ball played across the 6-yard box was converted by Scannell.