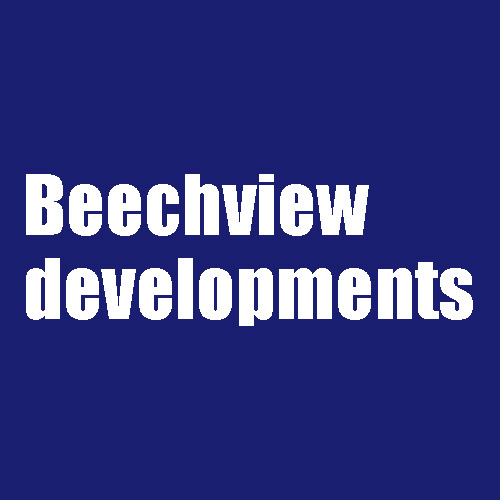 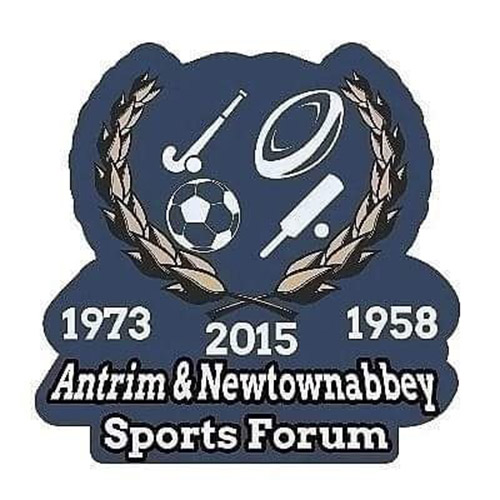 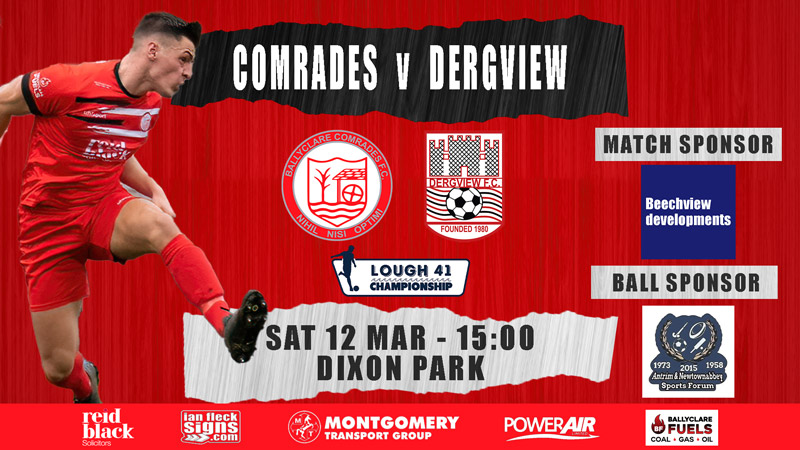 We welcome Dergview to Dixon Park tomorrow afternoon in our next Lough 41 Championship fixture.

Dergview are right in the thick of top-6 battle, sitting in 7th position, just 3 points behind Ards in 6th with a game-in-hand. Last week, Dergview and Knockbreda battled to an equal share of the points and goals in a high scoring encounter at Darragh Park. The visitors moved in front after just six minutes through former Comrades forward, Ciaran Heggarty, but the home side levelled soon after courtesy of Jamie Brown’s finish. Tommy Canning’s side then seized the lead themselves midway through the first half when Matthew Kirk converted from the spot but Heggarty bagged his second of the game not long after the break to bring ‘Breda back level. And the east Belfast side thought they had secured the points when, four minutes from time, another former Comrades player, Liam McKenna knocked home their third with a low shot on the counter attack but, in the end, it finished honours even when Mikhail Kennedy scored five minutes into stoppage time.

The Comrades conceded a late sucker punch during the week as Conor Kerr struck deep into stoppage time to secure a point for Loughgall from Ballyclare Comrades’ visit to Lakeview Park. The visitors, playing under caretaker boss Chris Ramsey following Paul Harbinson’s recent departure, moved in front after half-an-hour under Liam Hassin. But their hopes of picking up only their second victory since the start of November were dashed in the 95th minute were dashed when Kerr popped up to equalise for the Villagers.

The last time these two sides met, two goals midway through the second half saw Dergview defeat Ballyclare Comrades at Darragh Park. Scoreless at the break, Ballyclare came close to open the scoring on a number of occasions. Ciaran Heggarty flashed a header just wide early on before turning provider to tee up Gary Donnelly to send a 20-yard effort the wrong side of the target. Heggarty continued to be a threat, with another header coming from a Lee McCune cross while, early in the second half, he twice tested Dergview keeper Alan Buchanan albeit with no success. However, that all counted for nothing on 67 minutes when the home side moved in front courtesy of Cathal Farren’s successfully converted spot-kick. Then, just six minutes after that, it was 2-0 after a good team move teed Matthew Kirk up to beat Richard Purcell with a sublime finish. 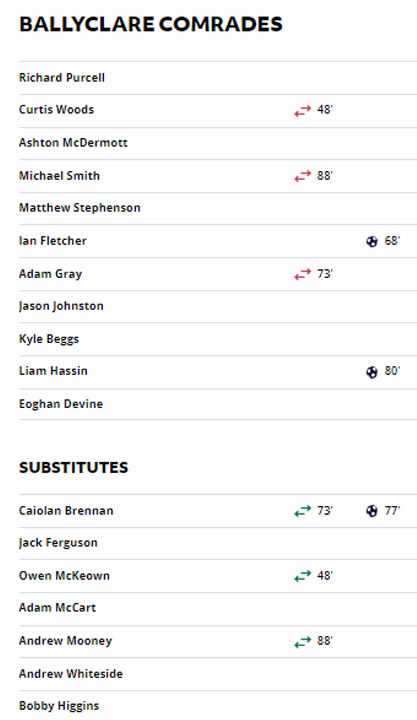 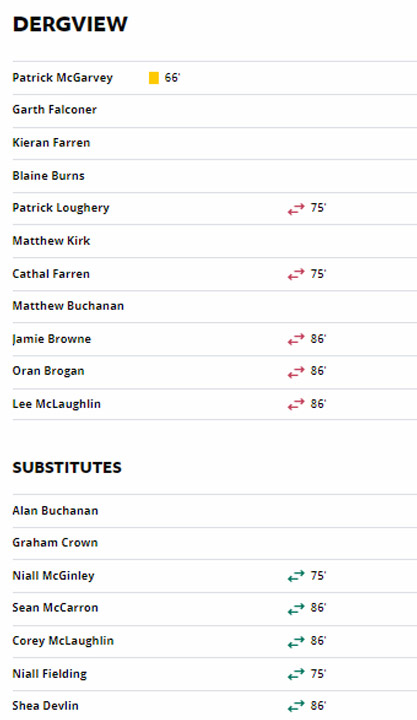 The first half was extremely scrappy from both sides and there was little to trouble either ‘keeper until the opening goal went in on 25 minutes. Comrades were caught out when a free kick was played to the back post and headed across goal where Matthew Buchanan slid in to convert from close range.

The hosts reacted to going behind and finished the second half looking marginally the more dangerous side, although they weren’t exactly pummelling the Dergview defence.

There were a couple of moments of danger created which at least gave hope to the home supporters. Firstly, on 30 minutes, a great delivery from a free kick played in by Ian Fletcher caused havoc in the box and a scramble ensued before the ball was eventually cleared. Then, four minutes later, Kyle Beggs surged into the box from the right and tried to pull the ball back to Michael Smith in a great position, but a defender managed to get in a vital block.

Comrades went in at the break with much to do and the early signs in the second half were not encouraging as the visitors looked the more likely to add to score. On 58 minutes a high ball played into the box fell to Browne and he connected well with a half-volley from 16 yards, but Richard Purcell was well placed to save comfortably. Then, in the 63rd minute, Kirk was set free to run on goal but was denied by Purcell who was alert to the danger and came out to smother the ball just inside the box.

The turning point of the game followed the award of a penalty for the hosts in the 65th minute after a Dergview player rashly raised his foot to connect dangerously with Jason Johnston’s head from a ball played into the box. The referee had no hesitation in pointing to the spot and this is where the drama started. Michael Smith stepped up to take the spot-kick, but saw his effort saved by McGarvey. However, the referee’s assistant immediately raised his flag for the ‘keeper coming of his line before the ball was struck. The penalty had to be retaken and Michael Smith stepped up again, only to see his effort saved again by McGarvey. Yet again however, the assistant’s flag was raised as the ‘keeper had come off his line. Comrades were now given a third opportunity to score from the spot and this time Ian Fletcher stepped up to coolly send McGarvey the wrong way and level the scores a full three minutes after the penalty had been awarded.

The tide now turned, with the visitors losing their heads somewhat after conceding the lead in controversial fashion and Comrades now looking a different side, although it took a great block from Matthew Stephenson on 70 minute to deny Browne after his shot from 10 yards looked destined to hit the target.

Two minutes later the home side threatened when Adam Gray beat two men to advance into the box, but his resulting effort was fired wide.

Caiolan Brennan was introduced to add fresh legs for Comrades and in the 77th minute he made a telling impact as he gave his side the lead after hitting a firm shot from 15 yards which went through the ‘keeper’s hands.

The hosts now had their tails up as they smelt the possibility of an important victory and on 80 minutes they grabbed a two-goal cushion. Kyle Beggs did very well to get to the by-line inside the box before playing the ball across the goal, where Liam Hassin was there to convert from two yards out.

This was enough to seal a morale boosting win for Comrades and send their supporters home happy after a hard few months.