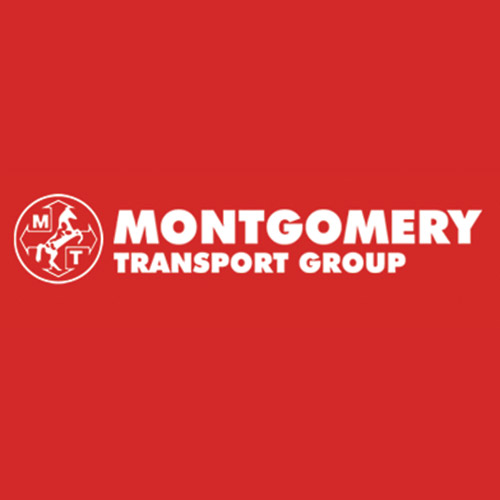 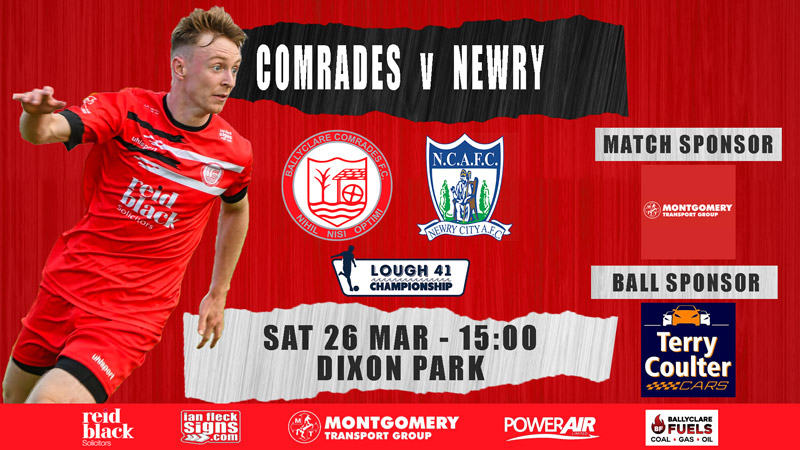 We welcome Newry City to Dixon Park tomorrow afternoon in our final Lough 41 Championship fixture before the split.

Entry: Pay at the gate – £8 (Adult) / £5 (Concession) BUY ONE GET ONE FREE WITH THE NATIONAL LOTTERY FOOTBALL WEEKENDS – Following payment of match admission, the match attendees must clearly display their TNL ticket at the gate to matchday staff to be eligible for the offer. This will allow free admission for their accompanied guest free of charge. Each club has been given a limit of 150 tickets, which will be distributed on a first come, first serve basis.

Newry City are guaranteed to go into the split sitting top of the table as they’re currently 4 points ahead of second place Annagh United. Last week, leaders Newry City and bottom of the table Queen’s University played out a scoreless draw at The Showgrounds.

Last week, Dundela swept to a comfortable three-goal defeat of Ballyclare Comrades at Wilgar Park. Eamonn Fyfe opened the scoring as early as the eighth minute after getting on the end of a ball over the top and beating keeper Richard Purcell one-on-one. Then, after a quarter-of-an-hour, David Fearon made it 2-0 with a tap in after Ryan McKay had done well down the left before delivering the ball into the box. That was how it stayed until the final few minutes when Rhys Annett added a third after he skipped past a couple of defenders, took it past Purcell and slotted into the empty net. The result means Stephen Small’s new side will go into the split in 9th position.

The last time these two sides met, Ballyclare Comrades upset the form book to defeat leaders Newry City at The Showgrounds. The Comrades hadn’t picked up a league win since mid-October while Darren Mullen’s City, with an eight point advantage at the top, hadn’t lost from around the same time. But that all counted for nothing at a foggy Showgrounds which saw the visitors emerge victorious courtesy of Ciaran Heggarty’s stunning 30-yard drive towards the end of the first half. Just before that Newry might have broken the deadlock but Daniel Hughes was denied by Jack Ferguson with the rebound going into the side netting. Newry did see a lot of the ball after the break but they failed to turn their possession into anything productive in front of goal and thus slipped to a first defeat in over two months. 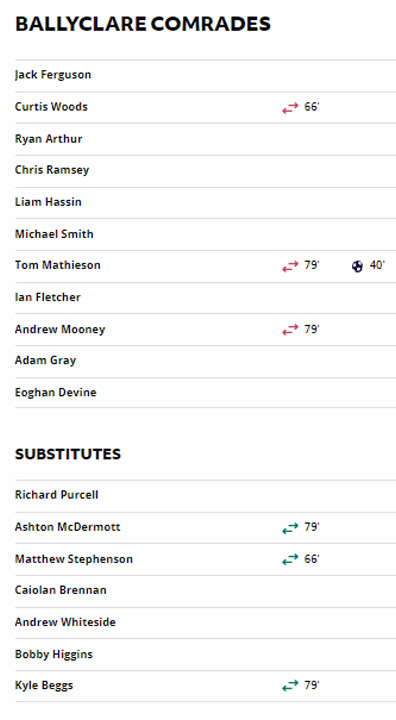 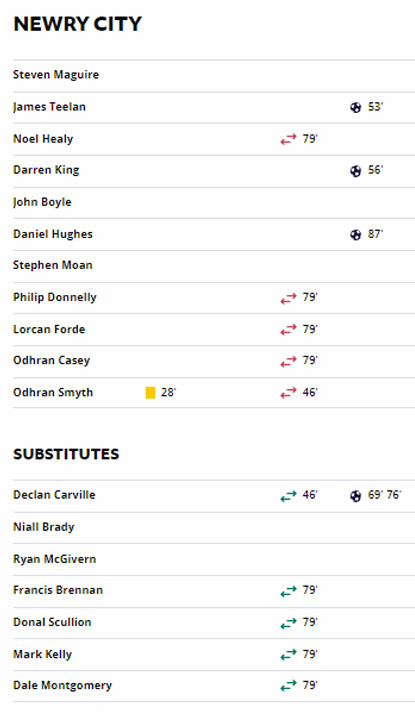 After going in at half-time ahead, a second half capitulation from Comrades ensured that they fell to a heavy defeat against league leaders Newry City.

The visitors started the match on the front foot, having most of the possession, but the hosts were defending well at this stage and kept chances to a minimum.

The closest Newry came in the early stages was in the 16th minute when Hughes swung on the ball from the edge of the box sending it narrowly wide of the post.

Newry continued to press, but they weren’t making many in roads, whilst Comrades had to be content with playing on the break.

The visitors had an opening on 38 minutes when Forde cut in from the left and made space for an effort from 10 yards, but he fired his effort high and wide of the target.

Two minutes later Comrades grabbed the lead against the run of play with a well worked goal. A good move ended with Michael Smith sliding a perfect through ball to split the Newry defence and send Tom Mathieson clear into the box where he finished with a firm shot past the ‘keeper from 8 yards.

Things might have got even better for the home side in the 44th minute when a Newry defender badly misjudged a high ball allowing Andrew Mooney to get to it before the outrushing ‘keeper just inside the box, but a moment’s hesitation by the striker allowed a defender to get back and divert his effort wide of the target.

The second half started with Newry predictably laying siege to the Comrades box. This time however the visitors had stepped up their game considerably and the hosts defensive resilience of the first half had disappeared.

Eight minutes into the half the visitors were back on level terms when the impressive Teelan turned 16 yards out and struck a well-placed shot into the bottom corner of the net through a crowded box.

The floodgates were now open, and Newry soon had the lead. In the 56th minute a perfectly delivered cross from Hughes found the head of King who made no mistake from 6 yards.

On 69 minutes the table-toppers stretched their lead when another perfect cross dug out from the right wing was met by a towering header from Carville 9 yards out, which sent the ball perfectly just inside the far post and past the despairing dive of Jack Ferguson.

Carville, who had come on as a half-time substitute was to play an immense part in Newry’s superb second half display and he got his name on the scoresheet again on 76 minutes when after a corner the ball broke to him 17 yards from goal, and he struck a sweet volley which flew into the net past a number of bodies.

Newry rounded of their demolition job with a fifth goal in the 87th minute. Powder-puff tackling from a demoralised homes side allowed Hughes the chance to lash the ball home from the right side of the box.