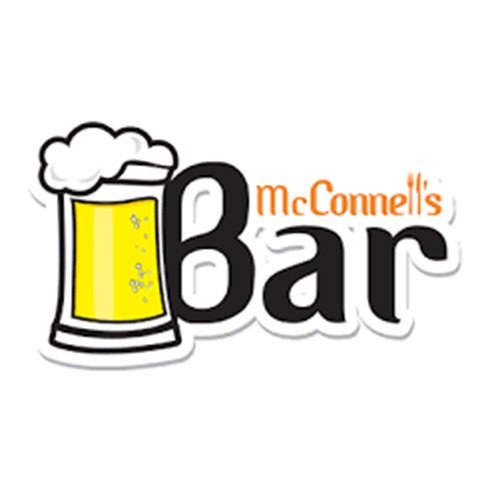 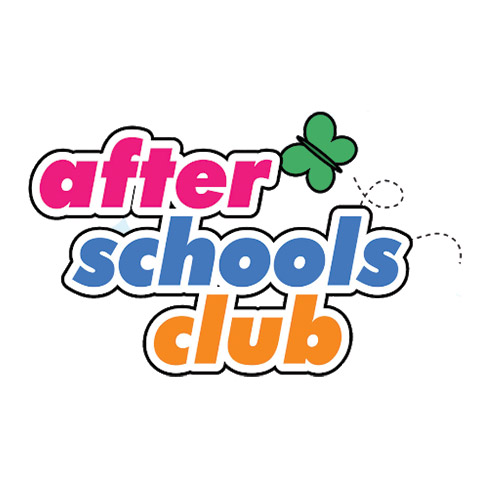 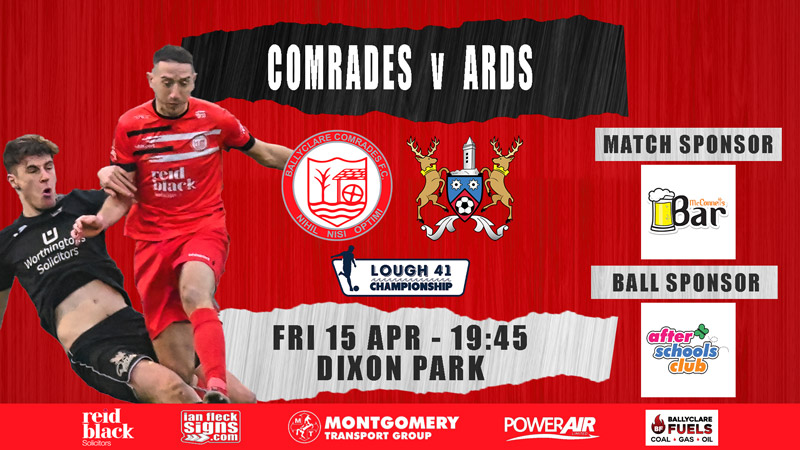 We welcome Ards to Dixon Park tomorrow evening in our next Lough 41 Championship fixture.

Last week, Ards battled to an equal share of the spoils with Dundela in an entertaining four-goal clash at Wilgar Park. The Duns moved in front after a quarter-of-an-hour through Eamon Fyfe when he pounced on the loose ball after his initial effort was kept out by keeper Jack Lemoignan just inside the area. Ards levelled a couple of minutes into the second half. Benny Igiehon did well to keep the ball alive inside the area before it fell kindly to Ross Arthurs who duly tucked it past Marc Matthews. That was how it stayed until the 79th minute when Rhys Annett edged the Duns back in front after bursting through the defence to fire home at the right post. But Ards hit back five minutes after that to earn a point after Daniel Reynolds was on hand to knock home the equaliser at the far post.

The Comrades began their post-split fixtures with defeat as Brendan McLaughlin bagged the stoppage time winner for Institute at the Brandywell. ‘Stute had gone in front after just 12 minutes when Mark McFadden smashed the ball home following a scramble in the box from a corner. The visitors might have levelled midway through the first half but Ian Fletcher was unable to beat keeper John Connolly from the spot. However, Ballyclare did find their equaliser four minutes after the interval courtesy of Andrew Mooney’s composed finish after he had pounced on an underhit back pass. And that was how it stayed until three minutes into stoppage time when McLaughlin popped up with a back post header to secure a crucial three points for ‘Stute.

The last time these two sides met at the beginning of March, Ards hit five past the managerless Comrades. Matt Tipton’s side opened the scoring after 16 minutes when David McAllister curled a cross onto the edge of the six yard box for Ross Arthurs to control and stab past Jack Ferguson. Daniel Reynolds added a second just after the half-hour mark when he fired into the roof of the net at the back post after a corner had been flicked on from the left. And it got worse for the visitors when they fell further behind just before the break. Reynolds turned provider with a low ball across the face of goal for McAllister to touch home at the left post. That was how it stayed until the 79th minute when McAllister doubled his tally from the left side of the area from Salou Jallow’s cross from wide on the right, albeit via a deflection off Ryan Arthur. Then, with five minutes to go, Eamonn Scannell completed the scoring after sliding in to turn home Benny Igiehon’s ball from the right. 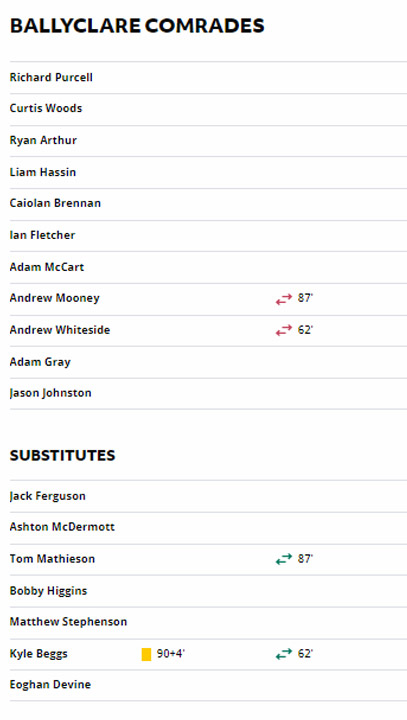 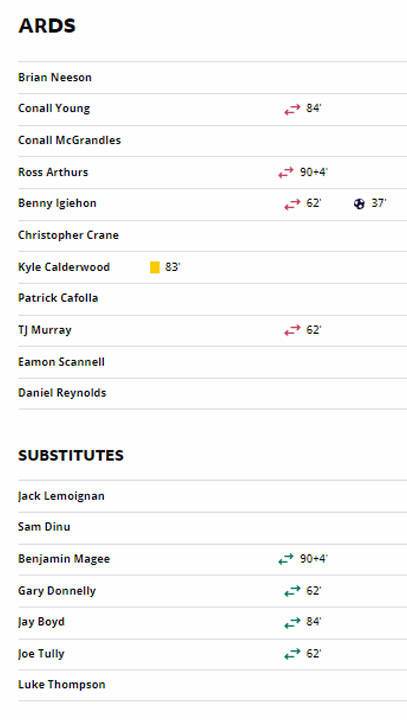 Comrades fell to a narrow defeat against Ards at Dixon Park as their relegation fears increased.

The hosts started in positive fashion and in the 10th minute had the first chance of the game when Adam Gray dug out a cross from the left to the back post where Andrew Mooney headed over and wide from a difficult angle 5 yards out.

From around the midway point if the first half the visitors began to assert some control. On 27 minutes a dangerous ball played into the 6-yard box by Reynolds looked set to be converted by Igiehon, but a challenge from Adam McCart was enough to ensure that the Ards striker shot over the bar.

Two minutes later a ball over the top eluded the Comrades defence and set Arthurs free to run into the box, but he was denied by a superb block from Richard Purcell who was alert to the danger and had advanced from his goal.

The deadlock was broken in the 37th minute when a defensive mistake gifted Ards the lead. Adam McCart looked to shield the ball back to Richard Purcell in the box but allowed Igiehon in to knock the ball into the empty net.

Comrades had a decent chance seven minutes after the restart when Caiolan Brennan played the ball in from the left side of the box to find Andrew Whiteside in space 13 yards out, but he scuffed his effort, and it was easily blocked by a defender.

At the other end on 58 minutes Igiehon received the ball inside the 6-yard box, but before he could turn Comrades got defenders around him and he could only fire over.

In the 68th minute the visitors had a good chance to double their lead when two ex-Comrades men combined, with Donnelly feeding Tully to run into the box and shoot from 16 yards, but Richard Purcell made a fine save to deny him.

Donnelly then had an effort on 72 minutes when he hit a well struck shot from 20 yards, but the impressive Purcell was well placed to save.

Comrades had done enough to keep in with a chance of getting something from the game and in the latter stages threatened more consistently.

On 80 minutes Liam Hassin strode onto the ball 35 yards out and hit a fierce shot which rose just over the bar. Then in the 89th minute Curtis Woods played a ball into the box to the back post where Adam McCart got in a header from 8 yards, but his effort went too close to Neeson who saved comfortably.

Three minutes into injury-time Beggs, who had made a difference after coming on as a substitute, flashed a great ball across the goal, where Adam McCart slid in and was a split second away from connecting for what would have been a certain goal.

It was not to be for the home team, and they remain with work to do if they are to retain their position in the Championship.