We travel to Clandeboye Park tomorrow evening to take on Ards in our next Lough 41 Championship fixture.

Last week, Ards produced a storming second half performance to defeat HW Welders at the Blanchflower Stadium. The Welders had gone in front early on when Callum Byers met a corner from the left to direct the ball past Alex Moore. They held that lead until six minutes into the second half when Eamon Scannell beat Samuel Johnston from distance at his near post. Michael McLellan restored the Welders advantage just before the hour with a driven finish from six yards out but two goals in three minutes from Adam Salley and Ross Hunter tipped the balance in favour of the visitors. Scannell then made it 4-2 with a quarter-of-an-hour remaining with a near post header before bagging his hat-trick on the counter attack not long after that.

Ten-man Ballinamallard United battled back to earn a draw from Ballyclare Comrades’ visit to Ferney Park. The Comrades moved in front after eight minutes when, following a good team move also involving Calvin McCurry and Liam Hassin, Gary Donnelly curled an effort from 20 yards into the net past keeper Michael Lynch. The Mallards went a man down a few minutes from the end of the first half when Shane McGinty was sent-off following an altercation with Donnelly. But Harry McConkey’s side recovered to level just before the hour after John Edgar got on the end of a good cross to beat Declan Breen with a bullet header.

The last time these two sides met in August, Ards claimed all three points with a 2-1 victory at Clandeboye Park. Matthew Tipton’s side needed just over sixty seconds to move in front when Ross Hunter pounced on a mistake at the back to open the scoring. It was a lead they held until eight minutes into the second half after Calvin McCurry latched onto a Kyle Beggs pass to lob keeper Alex Moore. However, Eamon Scannell bagged what proved to be the winner with six minutes remaining with a header following a counter attack down the right. 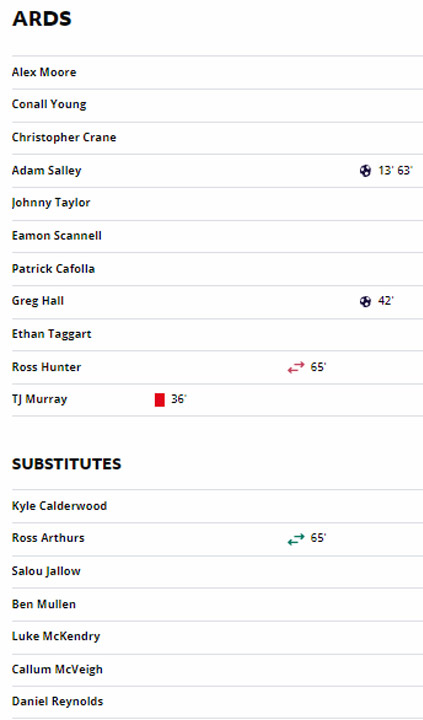 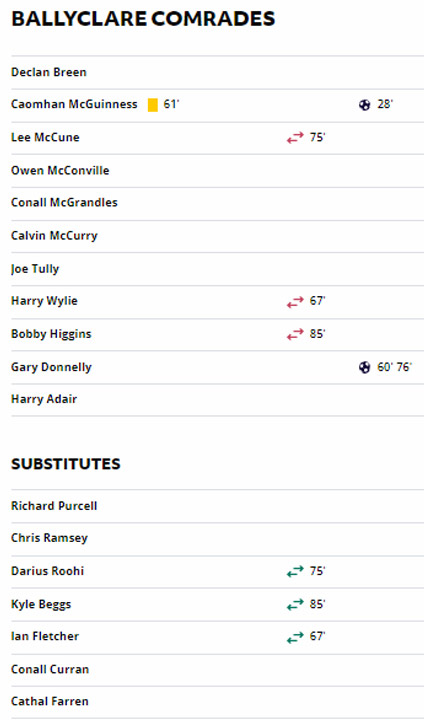 Comrades came away with a point from a highly entertaining game against Ards at Clandeboye Park.

The home side had the first chance inside three minutes when the ball fell to Salley at the back post from a corner, but he fired a first-time shot high over the bar from the edge of the 6-yard box.

However, it was Comrades who soon began to look the more threatening and on 7 minutes they came close when a dangerous ball played across the box by Calvin McCurry was met sweetly on the volley by Gary Donnelly who was only denied the opening goal by a superb save from Moore, one of many he was to make during the course of the match.

A minute later Moore again kept Comrades from taking the lead when Owen McConville got on the end of a McCurry cross to head an effort towards the top corner of the net, however the ‘keeper was able to somehow keep the ball out.

With the visitors enjoying a dominant spell, they almost opened the scoring in the 10th minute. Calvin McCurry was again the provider, finding Joe Tully in the box and he produced a shot which Moore did well to keep out at the near post.

The visitors will have felt they should have been ahead when against the run of play Ards snatched the lead on 12 minutes, with Salley sliding to get on the end of a ball played into the box and scoring from 6 yards.

On 25 minutes Comrades were almost gifted an equaliser when a mix up in the hosts’ defence allowed Gary Donnelly to nip in and steal the ball inside the box, but he couldn’t find a way past the ‘keeper from a difficult angle.

Three minutes later Comrades did get back on level terms. A devastating counterattack saw Joe Tully race up the left wing and play a dangerous ball into the box which Ards failed to clear. The ball fell to Caomhán McGuinness who slammed it into the net off the underside of the bar from 15 yards out.

The momentum of the game seemed to have switched decisively towards Comrades on 36 minutes when the home side were reduced to ten men after Murray was sent off after the referee adjudged him to have dived inside the box and gave him his second yellow card.

Strangely however, the rest of the half saw Ards dominate and they managed to regain the lead. Having won a series of corners late in the half, they took advantage of one in the 42nd minute when Comrades couldn’t clear the ball and it fell to Hall who headed in from a couple of yards out.

Ards went in at the break with the lead and four minutes into the second half they threatened to extend it when Hunter shot just wide from 12 yards to almost punish indecision in the visitors’ defence.

Despite heavy rain and a swirling wind, both sides continued to provide excellent entertainment. On 54 minutes it was Comrades who came close again when Caomhán McGuinness drove forward up the middle of the pitch and slid the ball wide to Calvin McCurry who fired in a crisp shot from the right side of the box which Moore once more did well to block.

In the 59th minute the visitors were again frustrated by the impressive home ‘keeper. This time, after a good link up on the edge of the box between Lee McCune and Joe Tully, McCune hit and effort which seemed destined for the top corner of the net, but Moore managed to tip it over with his fingertips.

However, a minute later the ‘keeper couldn’t prevent Comrades equalising when an in-swinging corner played in by Gary Donnelly saw the ball go directly into the net through a crowded box.

Ards soon regained the lead once again when in the 62nd minute Salley scored from the penalty spot after a foul just inside the box.

The pulsating action continued. In the 66th minute the two top performers in the game were again in the thick of the action when Gary Donnelly floated in a free kick from the left edge of the box. It looked as if he had managed to deceive the ‘keeper, but again Moore produced a wonder save to claw the ball away from under the bar.

Comrades continued to press forward, trying to make the extra man count. On 76 minutes they levelled for a third time when Gary Donnelly struck a low effort from 25 yards which eluded the ‘keeper and hit the back of the net.

The final minutes of the match saw the visitors striving to get the winner. On 87 minutes they came close when McGuinness slid the ball through to recently introduced substitute Conall Curran and he shot early from the right side of the box, forcing a good save from Moore.

With almost the last action of the game, three minutes into injury-time, Comrades came agonisingly close to taking all three points. Ian Fletcher played in Darius Roohi who made space to drive in a fiercely hit effort from 16 yards, but Moore produced his best save of a superb performance when he managed to get a touch to the ball and divert it onto the underside of the bar from where it bounced out to safety. 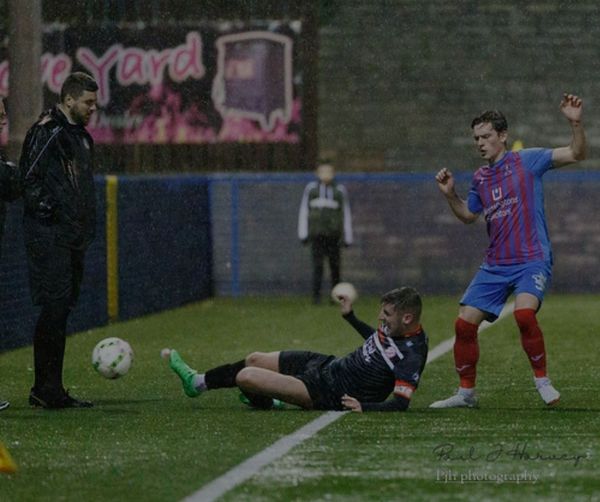