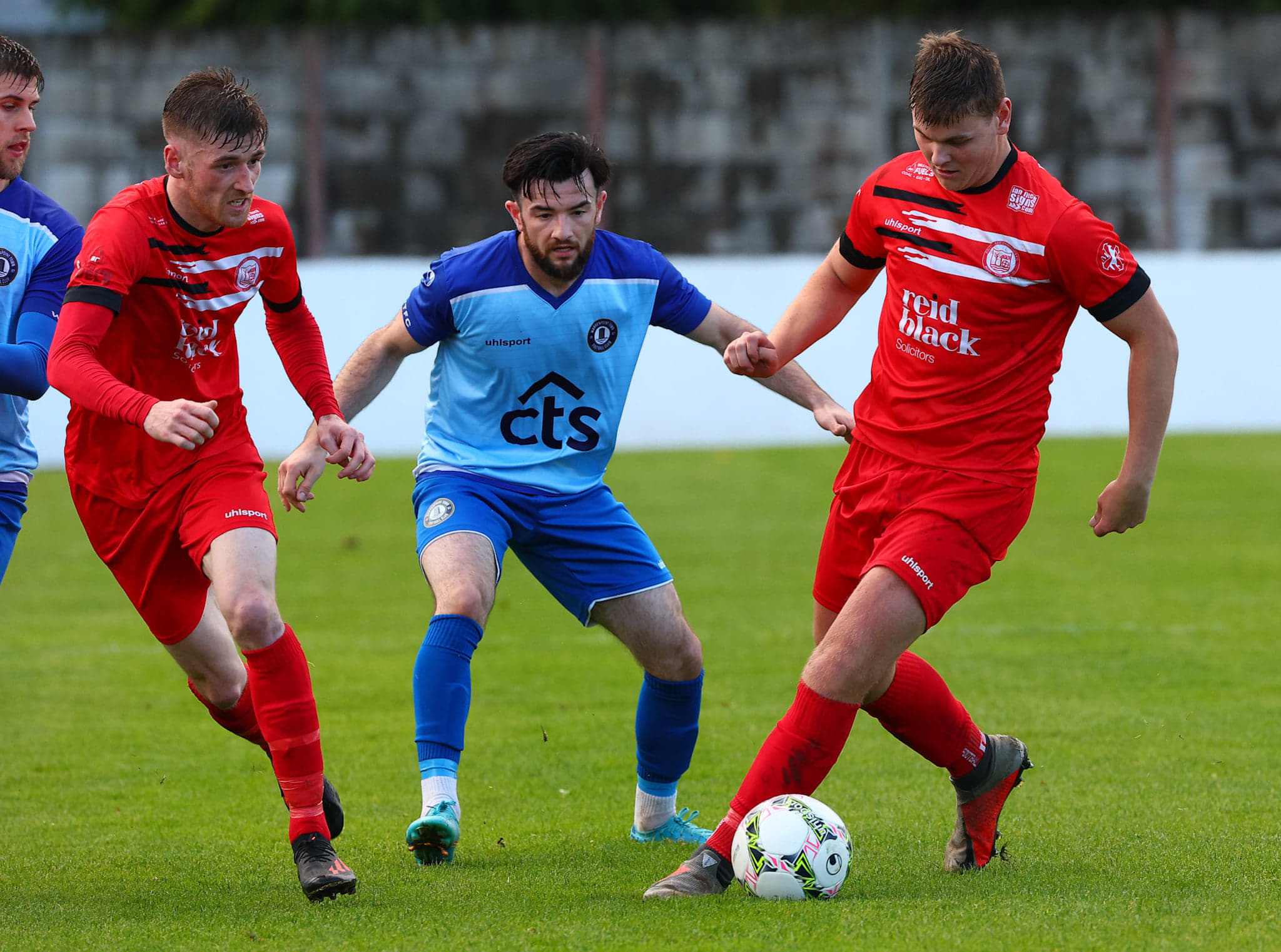 We travel to Milltown tomorrow afternoon to take on Warrenpoint Town in our next Lough 41 Championship fixture.

Warrenpoint Town shared the spoils with Institute from a Boxing Day clash at the Brandywell. Scoreless at the break, ‘Stute moved in front after half an hour when Andrew Whiteside volleyed into the top corner. And they might have doubled their advantage on 83 minutes only for Cathair Friel to head against an upright while Mark McFadden failed to convert the rebound. That reprieve opened the door for ‘Point to bag their equaliser just sixty seconds later when, from a corner, Adam Carroll beat Dylan Doherty to ensure it finished honours even.

Ballyclare Comrades and Newington shared the spoils from an evenly matched middle of the table clash at Dixon Park on Boxing Day. Although scoreless at the break, the visitors did twice come close during the opening 45 minutes when Darren Stuart broke through to fire straight at Declan Breen and then again after half-an-hour only to be denied by a goalline clearance. The sides traded chances in the second half but it took Darius Roohi to break the deadlock with 14 minutes remaining when nodded home a Gary Donnelly free-kick from four yards. However, Newington grabbed a point deep into stoppage time when Jack Reilly fired home a great shot from outside the box.

The last time these two sides met in October, Ballyclare Comrades and Warrenpoint Town shared the spoils at Dixon Park. The home side moved in front with just over a quarter-of-an-hour on the clock. Calvin McCurry broke clear of the visiting defence but was brought down by Daniel Byrne just outside the box and, from the resultant free-kick, Joe Tully fired into the far top corner. Luke Walsh might have levelled soon after only to hit the back post with a header from a corner. However, Walsh did equalise for ‘Point eight minutes from time on the rebound after Byrne had nodded a Kealan Dillon free-kick against an upright. ‘Point thought they had snatched the win deep into stoppage time but Joshua Wilson’s finish was ruled out offside. 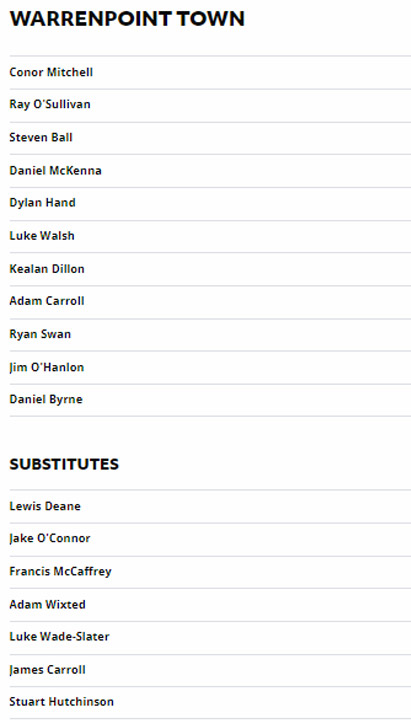 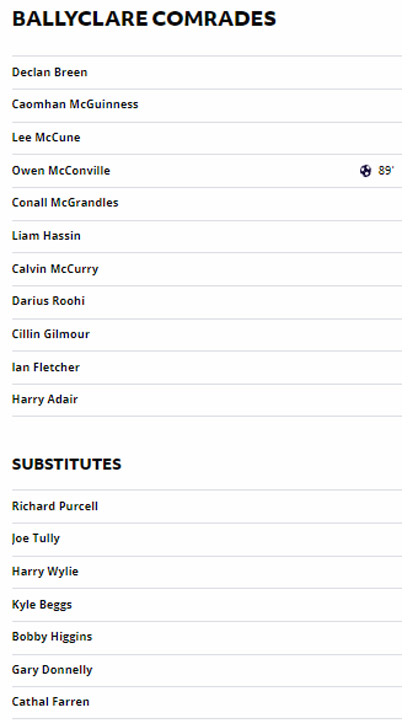 A gritty performance and a late goal earned Comrades an excellent win from their trip to Warrenpoint.

The hosts started strongly and created a good chance inside three. A swift break ended with the ball being played into the box from the right where Adam Carroll got his head to it with a stooping effort from 6 yards which forced a great save from Declan Breen.

Comrades tested the home ‘keeper in the 8th minute when Calvin McCurry made space for a shot from outside the box which Mitchell was forced to parry clear.

Warrenpoint however had most of the attacking possession in the first half. They came close to the opener on 13 minutes when Swan broke through a tackle inside the box and the ball rebounded back off him and onto the post.

Comrades were having to defend at full-stretch to keep the hosts at bay but showed good resilience to keep chances to a minimum. Although Declan Breen had to be alert on 32 minutes to palm the ball over the bar from a fierce shot hit from the edge of the box effort by Swan.

The visitors had had little in the way of chances in the first half, but on 45 minutes they fashioned a good one when Calvin McCurry robbed a defender on the by-line and played the ball into the box to Darius Roohi, but his first-time effort from 11 yards went just wide of the target.

Comrades started the second half with more attacking purpose. In the 56th minute Darius Roohi did well to keep possession inside the box and then lay the ball off to debutant new-signing Cillin Gilmour who struck and effort wide from 18 yards out.

Despite Warrenpoint still having the bulk of possession, Comrades’ excellent defending and good closing down prevented them from getting many chances. However, on 59 minutes the hosts did threaten from successive corners. First, Byrne got his head to the ball and sent and effort on target which Declan Breen had to claw away from under the angle of post and bar. Then from the resulting corner Walsh headed wide from 6 yards.

Three minutes later Comrades had a chance on the break when Cillin Gilmour fed Lee McCune, who had surged forward with the home defence stretched, but McCune’s resulting effort from the edge of the box was dragged wide of the target.

The visitors’ confidence increased as the clock ticked down. They created a chance in the 84th minute when Darius Roohi broke forward up the right side and managed to find Calvin McCurry in the box, but the striker’s effort under challenge from a defender went wide from 8 yards.

In the 88th minute Comrades stunned the hosts with what turned out to be the winning goal. Gary Donnelly played a dangerous ball in from a corner to the back post where Owen McConville was there to head home from close range.

Two minutes into injury-time Warrenpoint had a chance to salvage a point when a cross from the left found the head of Walsh, but his effort went wide of the far post.

A minute later the visitors might have doubled their lead when a quick break saw Cathal Farren find fellow substitute Joe Tully in space, but his effort from the edge of the area dipped over the bar.