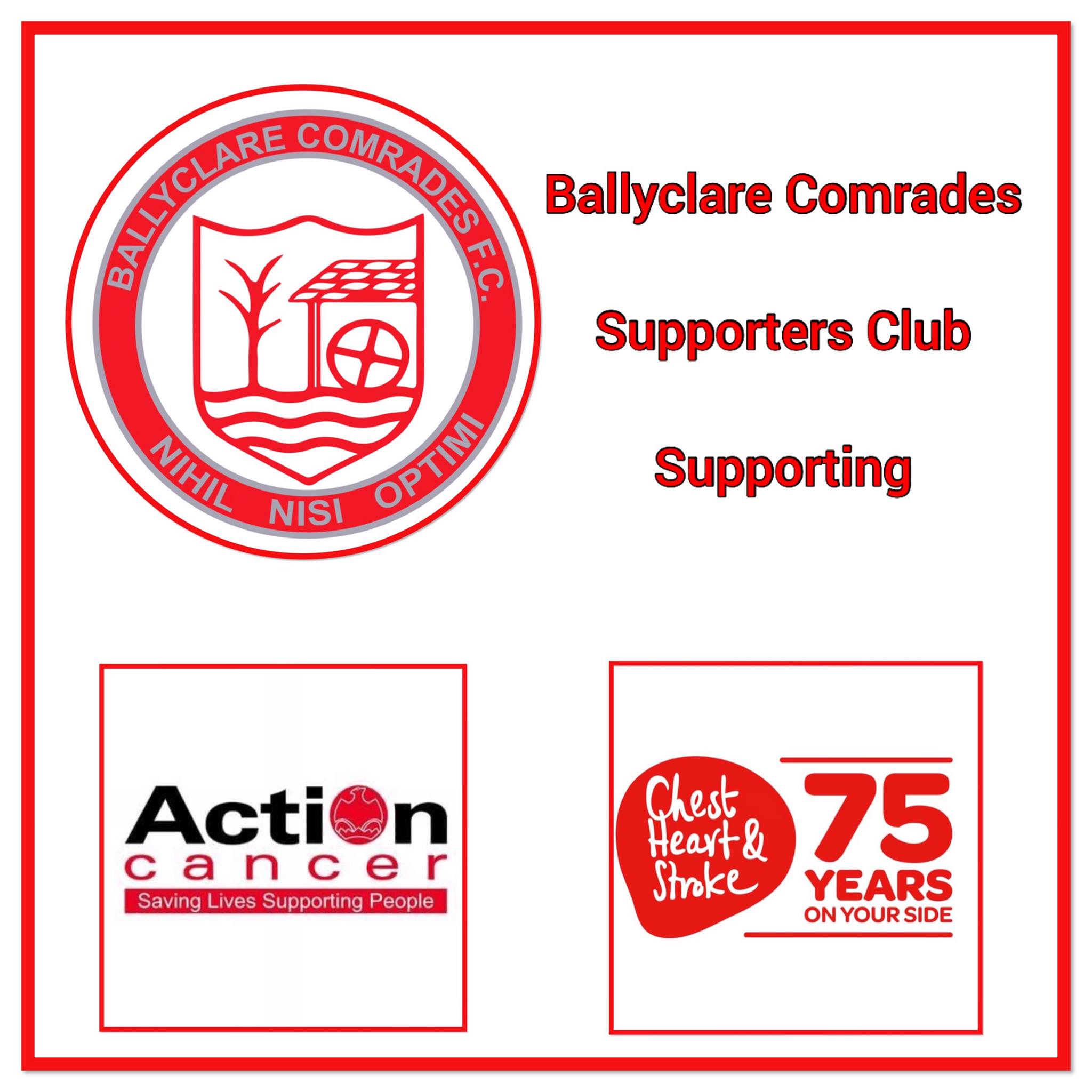 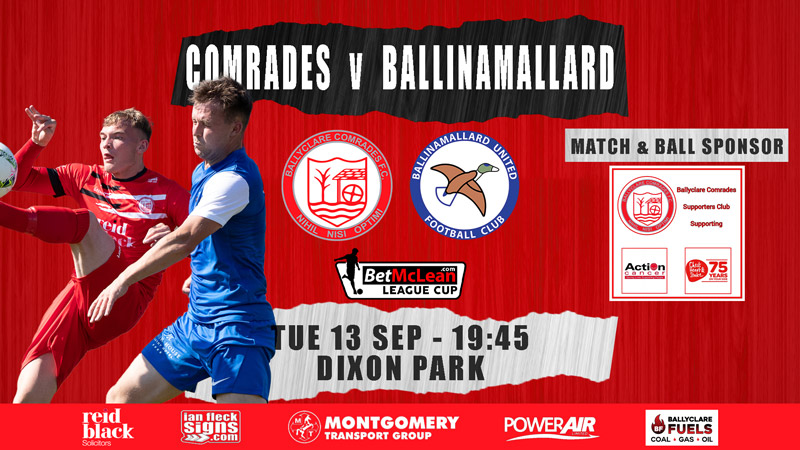 We welcome Ballinamallard United to Dixon Park tomorrow evening for the first round of the Bet McLean League Cup.

What: Bet McLean League Cup – Round 1

The Mallards are yet to record a victory in the Lough 41 Championship after their opening 5 fixtures this season. Their last outing was a 2-1 home defeat to Dundela at Ferney Park. The visitors moved in front after 11 minutes through Eamon Fyfe who connected with a Tony Kane corner to head past keeper Michael Lynch. Ballinamallard levelled, however, around the half-hour mark through Caolan McAleer. And that was how it stayed until midway through the second half when supersub Rhys Annett followed up with the winner after Kane’s initial effort had been pushed away.

The Comrades suffered the disappointment of a penalty shoot-out defeat to Dundela last week to exit the County Antrim Shield away at Wilgar Park. The home side started the strongest and took a deserved lead on 10 minutes when Igiehon received the ball in the box after an incisive thrust up the right and turned neatly to fire low into the far corner of the net. Dundela looked very capable of increasing their lead and they would have only for great goalkeeping from Declan Breen. The Comrades levelled the scores in the 68th minute when Joe Tully played a ball which eluded the home defence and set substitute Conall Curran free in the box and he coolly knocked the ball over the ‘keeper from 6 yards. Both sides pushed for a winner, however, it was the Comrades who may have come closest on the 89th minute when Darius Roohi played a great ball in from the left edge of the box which was met by a diving Joe Tully header from 9 yards that came out off the underside of the bar. Then, from the rebound, ‘keeper Cairns produced a great save to turn Conall Curran’s effort onto the bar. At the final whistle, the match moved straight to penalties to decide the winner. The hosts went first, and Magee scored, with Darius Roohi then levelling with Comrades’ opening penalty. However, it was Comrades who were the first to blink when Cairns saved Joe Tully’s effort which was Comrades second. All the next penalties were converted with Gary Donnelly and Conall Currran successful for Comrades until Dundela had the chance to wrap up victory with their fifth penalty. Goalkeeper Cairns stepped up to take it but was foiled by a save from Declan Breen. However, Cairns was to be the Dundela hero after all as he saved the next penalty taken by Elliot McKim to send his team through.

The last time these two sides met, the Comrades and Mallards fought out a scoreless draw in the season opener at Dixon Park. Ballinamallard squandered an early chance to seize the advantage when, after a quarter-of-an-hour, BJ Banda struck the crossbar with a penalty after he had been brought down by Conall McGrandles. For Ballyclare Joe Tully perhaps came closest just before the break only to be denied by a goalline Mark Stafford clearance. Stafford saved the Mallards again later in the game with another header off the line to thwart Cathal Farren while Banda had a late chance only to send the ball wide from a good position.

Comrades came from two goals down to advance past Ballinamallard to the next round of the League Cup after a thrilling encounter at Dixon Park.

The game started in lively fashion with an early chance for each side. On 5 minutes Mallards split the home defence with a ball which set McAleer free on the right side of the box, but he skewed his effort high and wide. Then, a minute later, a dangerous Joe Tully cross into the box saw the ball break off a defender to Calvin McCurry who forced a good save from ‘keeper Ray with a header from 6 yards.

In the 17th minute Caomhán McGuinness received the ball on the right and advanced to hit a fierce shot from 22 yards which Ray had to parry out.

The Mallards ‘keeper was again forced into action on 27 minutes when a dipping free kick effort from Joe Tully forced him to make a good save to tip the ball over the bar.

Seconds later the visitors grabbed the lead when a counter-attacked ended with Declan Breen having to make a good save from a McAleer effort from inside the box, but Reece Byrne was first to the loose ball, slotting home from 6 yards.

With Comrades reeling from going behind, Mallards doubled their lead in the 33rd minute when they beat the offside trap and Edgar ran free to finish confidently past Breen.

The hosts pulled a goal back on 37 minutes when a Mallards player blocked a Liam Hassin effort with an outstretched arm inside the box and a penalty was awarded which Darius Roohi confidently dispatched.

The visitors almost restored their two-goal advantage with the last action of the first half, two minutes into injury-time, when a corner found the head of Stafford, whose downward effort was cleared off the line by Ian Fletcher.

Comrades started the second half on the front foot. In the 50th minute another Joe Tully free kick, this time from 30 yards, tested the ‘keeper who could not hold onto it, but no Comrades player could get to the loose ball.

Three minutes later Caomhán McGuinness cut inside and shot from the edge of the box, His effort took a deflection off a defender, which forced Ray to make a fine save just inside the post.

McGuinness had another effort in the 64th minute when he again cut inside from the right to send in a shot from 16 yards which went wide of the target.

The hosts had a great chance to level the scores on 71 minutes when they were awarded another penalty after a great move down the left ended with a ball into the box being blocked by another outstretched Mallards arm. Recently introduced substitute Cathal Farren stepped up to take the penalty but his effort placed just inside the post was kept out by a superb save from Ray.

Incredibly, five minutes later, Comrades were awarded their third penalty of the night when Calvin McCurry was chopped down in the box. This time Gary Donnelly took the responsibility to shoot from the spot and he made no mistake to equalise for his team.

The hosts continued to press forward and on 80 minutes they came close to taking the lead. Gary Donnelly played in Joe Tully to shoot from 16 yards, but his effort met by another good save by Ray. The ball then broke back to Tully who shot again, this time hitting the angle of bar and post.

Comrades had been on top during the second half, but the visitors still posed a threat. On 89 minute a great delivery from a free kick saw the ball come off the head of Cónall McGrandles, who was prevented from scoring an own goal by a great save from Declan Breen.

On 90 minutes Mallards were screaming for a penalty when the ball struck Owen McConville’s arm in the box, but it was by his side in a natural position and the referee turned away the appeals.

The game moved to extra-time and on 101 minutes the guile of Gary Donnelly unlocked the visitors’ defence to find Conall Curran who finished confidently from 15 yards to put Comrades ahead for the first time in the game.

In the 104th minute Mallards came close to getting back on level terms when Morris glanced a header narrowly wide from a corner.

Two minutes later, Calvin McCurry was played in for a chance by Liam Hassin, but he shot wide of the far post from 16 yards.

Two minutes into the second half of extra-time McCurry had another chance when after a great move involving Conall Curran, Gary Donnelly played the striker in, but he slipped as he shot, and the ball went over the bar from 12 yards.

As the clocked ticked down Mallards piled on pressure to try to get an equaliser. In the 110th minute McGinty shot just wide from the edge of the box.

In the dying moments of the game the visitors were caught out pressing forward when ‘keeper Ray was robbed of the ball just inside the Mallards half by Liam Hassin who ran forward to slot home into the empty net and seal victory for Comrades.