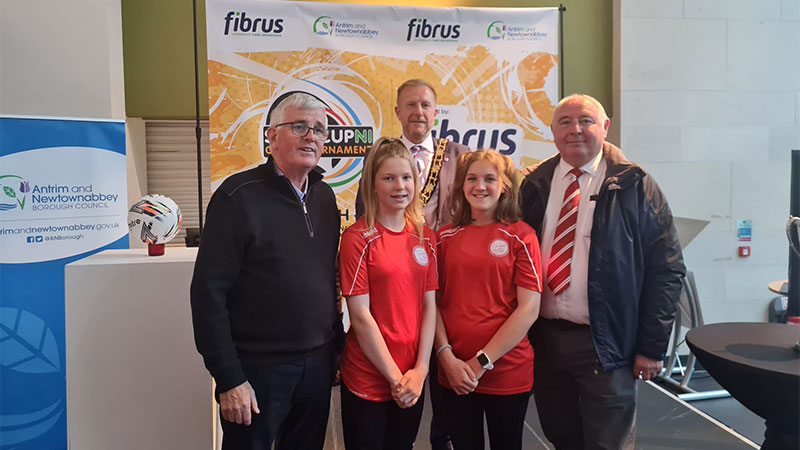 It has been described as the best Youth Football Tournament in Europe and this year, SuperCupNI is extending its footprint to introduce a Girls’ Tournament in July. Sponsored by Fibrus Broadband, the Girls’ Tournament will be played in Antrim and Newtownabbey Borough Council area. Ballyclare Comrades will compete in the U13 section with games played on Monday 25th and Tuesday 26th July. The U16 section includes teams from Northern Ireland, Republic of Ireland, Scotland, the US and Canada with games played on Monday 25th, Tuesday 26th and Wednesday 27th July. Ballyclare Comrades are delighted to host the U16 Final at Dixon Park on Friday 29th July with a 2:00 pm kick off. Comrades fans will also have an interest in the boys’ section with Bobby Higgins and Rhys McGarry having been selected for the Co. Antrim FA squad.
Pictured below are Comrades officials and players at the launch with Stephen Ross, Mayor of Antrim and Newtownabbey Borough Council.